Another Pet Dog Gunned Down By Police 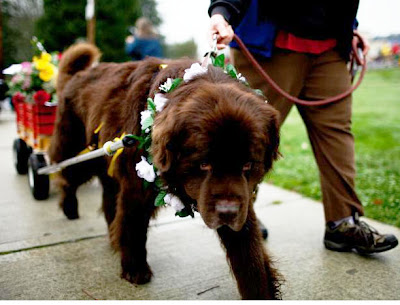 This is a sad Monday and I am sorry to start the week out with this horrific story.  But I think it is important to understand what is happening.  Last week another pet dog was gunned down by police.  This time it happened in Des Moines, Wash. and the victim was a 2-year-old Newfoudland named Rosie.  911 was called when someone in the neighborhood saw the 115 pound dog running loose, police tried to capture her using a catch pull and when that failed they tased her and again when that failed they shot her four times.  Rosie's situation is much like a few other's we have heard about recently, there was Gloria, the arthritic 11-year-old Yellow Lab that was gunned down by police in her own back yard, the dog in the dog park that was gunned down by an off-duty officer when the dog began playing with his dog too rough and finally the two leashed dogs that were gunned down by officers in St. Petersburg, FL that the officers claim attacked an unleashed blind dog, but the owners claim the two dogs were attacked by the unleashed dog.  I think all of these have a common thread which is officers seem a little too comfortable making the determination that lethal force should be used.  These are all PET dogs, these are not strays that are attacking them.  In each case except for the dog park, the owners have explicitly stated the dogs were not aggressive.  In Rosie's case, she had never bitten, lunged or showed aggression towards anyone, yet the police claim they felt their safety was in danger.
I am left just feeling sad.  Even if they find the officers in the wrong, Rosie is gone.  Rosie was a pet, who was loved by her owners and they felt a great deal of love from her... that is all gone and no matter what is discovered from this point forward, this fact remains.
The amazing side of this story is that people traveled from as far as Canada to attend a memorial for Rosie.  Newfoundlands and St. Bernards were pulling wagons filled with brightly colored flower arrangements in honor of the fallen pet.
Thank you to Dogster for bringing us this story.  To see more details on the story and to see more on the memorial, view the videos below.