Justice For A Dog In Wrongful Shooting 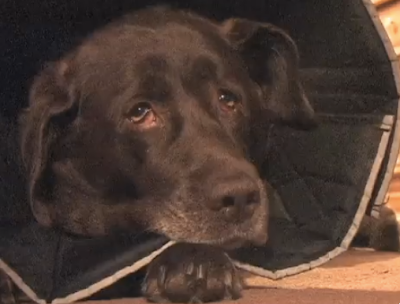 Dogster brought us a story today that is good news for one of the many wrongful shootings of dogs we have heard about in the last two years.  I've said it before and this story is a great example of it, that some officers have been a little trigger happy when it comes to dogs.  So we are all surprised and elated  when we heard that a Frederick County, Maryland, jury awarded a couple $620,000 in damages for the shooting of their affable chocolate Lab, Brandi.

The incident occurred in late 2010, when Brandi came bounding around the house to say howdy to sheriff's deputy Timonty Brooks. I sincerely doubt you've ever seen a dog who looked quite as affable. (I watched the dashcam footage, and there's no way Brandi should have been considered a threat. I'm not embedding it in this post because it might be disturbing. But here's a link to the Washington Post piece that contains the video, should you want to go there.)

Brooks and his partner had been serving a civil warrant on the son of Roger and Sandra Jenkins. The dogs were barking, and Roger Jenkins told the officers that he'd go put them away. Apparently Brooks somehow took that as a sign that they were aggressive, so when Brandi came out to greet him, he shot first, asked questions later.

The bullet struck Brandi in the area where the front leg connects to the shoulder. She went limping away, tail still almost wagging, looking kind of stunned about what just happened.

"It was very terrifying, because it was like one of your kids being shot," said Sandra Jenkins.

Brandi is 9 now, and never recovered physically from the incident. Her leg is badly damaged, and the Jenkins say it will likely be amputated in coming months.

Brooks, who "felt bad about the shooting since Day 1," according to the sheriff's department, was clearly way too trigger happy. If you watch the dashcam video, it's lucky he didn't also blast the couple's lumbering St. Bernard as well. In the footage, Sandra Jenkins runs after that dog, trying to get him away from Brooks.

The department has subsequently undergone training regarding dealing with dogs.
The dashcam video is likely behind the large award - $20,000 more than the Jenkins were seeking. You can see a snippet of the video on this WJLA report. (You won't see Brandi getting shot.)

Maybe this award will help trigger-happy law enforcement officers think twice before reaching for their guns when faced with something like a wagging Labrador retriever - or any dog who is not a clear threat.


I would love to hear your feedback on what you think of this case or any other case like this.  Give us a Bark!
Posted by Bark & Clark