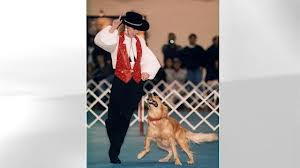 The other night ABC News did a story on dancing dogs, better known in the dog world as the sport Freestyle.  For those of you that don't know, essentially Freestyle is you and your dog doing a dance routine together.  It is so much fun! Both to train and to do!  I don't do this competitively at all, though I do dream of it.  I do it because it helps bring Neville out of shell.  We just dance together and through training him simple moves, he isn't so frightened of my hand swinging or leg raising and so on.

In the story they focused on what was probably the most well know duo in this sport,  Carolyn Scott & her Golden Rookie.  I never knew that Rookie had hip dysplasia and Carolyn had Polio, the two were attracted to each other for what should have hindered them in this sport.  But they were the team to beat.  If you watch the old footage of them, you can see just how much fun they were having.  Compared to some of the canine/human duos that this story covered that were just starting out, where their dogs didn't even want to stay in the ring or keep focus... you can imagine.

As the story continued, Carolyn talked about how Rookie taught her to be comfortable in her own skin, something she always had trouble with coming from her challenging childhood with Polio.  (This is where I started to cry and didn't stop until the story was done.)  The two had an incredible bond and I had always wondered where they were now.  Rookie was diagnosed with cancer and Carolyn took his last year off and just did all the fun things that Rookie would love.  Rookie passed away after a 15 year partnership,  what a life he led and what an impact he had.

Below is one of my favorite routines by the two.  The footage is not the best, but you will see all the important things.  Be sure to listen to the announcer talk about Rookie's input on each dance!  I hope this inspires all of you to get out and do something special with your dog this weekend, I will be with mine!

Have a safe and fun weekend!
Posted by Bark & Clark