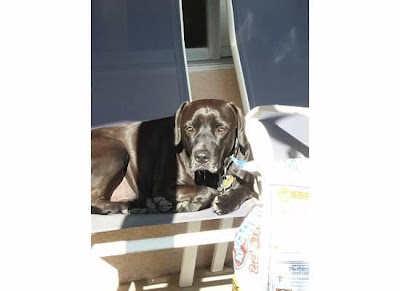 I learned this past Thursday that a good friend of mine and Bark & Clark's passed away, Chaco.  His human family are very good friend's of mine and supporters of my business.  I have known them for about 12 years or so and remember when they first adopted Chaco.

To say I will remember Chaco fondly is an understatement!  If you ever met him, you would fall in love with his sweet demeanor and high energy.   You would think that as time went on that energy would start to fade, but not for Chaco.  I remember in his front yard he had created what looked like a racing track from all the times he had ran around it... not out of boredom, this was just his routine!

I have lots of memories I could share, but what I remember the most is how great he was with his family.  Not just the adults, but how awesome of a kids dog he was and how friendly he was with anyone that came to the house.  Chaco was an ultimate greeter for sure!

I was even lucky enough to have Chaco as one of the few dogs that helped me kick off my first ever Pooch Parade!

He was smart, loyal and loving and I feel so honored I got to know him for the time that I did.

Rest In Peace sweet boy, you will forever be remembered and loved!