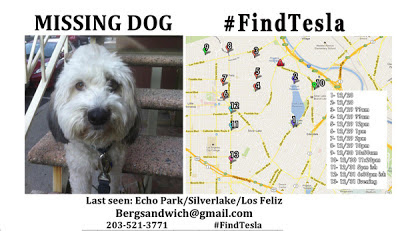 I understand all too well how hard it is to find a lost dog in Los Angeles, I also understand the turmoil that goes along with that.  So I feel for Alex Berg who has launched a social media campaign to find his missing dog.  The full story from LAist is below.

Losing a dog in a city the size of Los Angeles can certainly feel like a lonely proposition.

There is too much ground to cover, too many shelters to follow up with, and too many major streets for a dog to cross. But for Alex Berg, new Artistic Director of the Upright Citizens Brigade comedy theater in Hollywood, there's never been a bigger sense of community than when his dog Tesla went missing last week. Thanks to a core group of friends, volunteers and total strangers, one man's campaign to find his dog has gone viral.

The pup in question is Tesla, a medium-sized white poodle mix with big floppy ears and a shy personality. Last week, while Berg was briefly back east for the holidays, Tesla slipped through the fingers of a dog walker and bolted from his Silver Lake apartment. Almost immediately, a social campaign emerged.

"I emailed a few dozen friends of mine to let them know what had happened, and they all picked up the charge right away", says Berg during a phone call, while searching the Franklin Hills on foot. "From the beginning, the response has been overwhelming". What followed has been nothing short of a social media success story, albeit one that still awaits its Hollywood ending. Those hardy friends that Berg had emailed set about contacting shelters and organizing eager volunteers and friends-of-friends to conduct round-the-clock searches for Tesla.

As the hours between Tesla's last sighting grew, so to did the response. Working with a local print shop on Hillhurst in Los Feliz, hundreds of fliers were printed and posted anywhere that Tesla might have reason to roam. By the second day, the hashtag #FindTesla had sprung up, providing a unified mobile location for anyone looking to help out in the search - and for entrepreneurial twitter users to push out to local celebrities to help raise awareness.

In the five days since the #FindTesla campaign has sprouted up online, retweets have come from online personalities like Rich Eisen, Jeff Garlin, Ryan Adams, Taran Killam and Turtle from "Entourage." The team was even mentioned on KOST last night, with the Dido song "Thank You" dedicated to their cause.

Now, Berg's same Silver Lake apartment serves as the 24/7 command center for all things #FindTesla, with running maps that aggregate the latest in over a dozen confirmed Tesla sightings and current search locations for all active volunteers. A 'Dawnguard' has sprung up with early morning searchers poking around neighborhoods in the early dawn hours, since this is statistically the best time to find a missing dog.

Organizers at HQ are coordinating those in the streets to maximize surface area and canvas underserved locations. So far, the number of volunteers has crested well over 100, with people offering anything from 30 minutes to full days in support of the #FindTesla movement. The team has been so successful, they've even helped to reunited a different lost poodle named Snow with their owners. Yet Tesla remains at large.

As the days go on, dedication and determination for the #FindTesla campaign remain crucial. Tesla herself is microchipped and wearing a collar, but her shy nature makes her wary of strangers - even those carrying dog treats and bacon, as most volunteers have come to do. If you'd like to join the #FindTesla campaign, head to the hashtag on twitter for information on fliers, where to head next, and what else can be done. To reach Alex Berg directly, follow him at @ActuallyBerg. Any help is appreciated, so that everyone can work together to make Los Angeles feel just a little bit smaller for one scared poodle mix named Tesla.