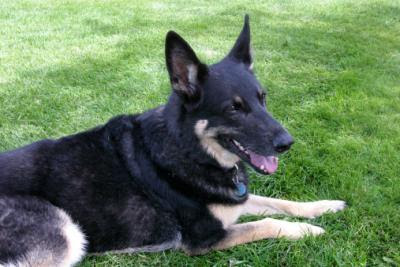 If you saw all the Harry Potter movies as I did, you will remember this dog.  He played "Padfoot" or the dog that "Sirius Black" transformed into.  Petside.com brought us the sad news of his new situation.  The dog's real name is Berry, a black German Shepherd, and his owner has had to make a very hard decision to give him up for adoption.  Berry is now at an English dog rescue waiting to find a new home.

According to a Fox News Report, Berry was given up by his owner, stuntman Paul Thompson, after he could no longer care for the dog. Thompson went on to say that he could no longer care for Berry and another canine companion, Porridge properly due to constraints from his job.
Whoever adopts these two canines are quite lucky as both Berry and Porridge starred in TV and movie roles.
I know it easy to say or think nasty things about Mr. Thompson for giving up these two dogs, but I think it takes a good amount of courage to understand you are not able to provide the life they deserve.  Thompson said in the Fox report "I found myself spending a lot of time away from home, the dogs needed more attention than I could give. It was a difficult decision to make but one I had to accept was best for the dogs."
Now the dogs are at the German Shepherd Dog Rescue, just bark on the link to find out more information on how you can help.
Our fingers and paws are crossed that these two find a good home quickly.
Posted by Bark & Clark