The Curse Of Having A Cute Dog 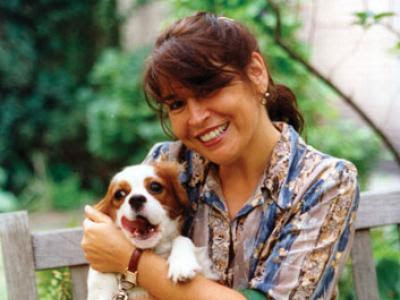 I read this great article yesterday on Petside.com, it is something we all can relate to no matter what dog you have.  The author, Dorri Old, is so easy to relate to and the humor had me laughing out loud!  I hope you all enjoy this as much as I did.


I reached for my iPhone right-handed while holding Buddy's leash in my left. It was my best friend, Maddy.  I launched into a tirade. "If one more person asks me what kind of dog Buddy is I'm going to scream."

I imitated passersby in falsetto, "'Oooh, what's his name? How old is he? Where did you get him?' When they ask what breed he is I have to say, 'Cavalier King Charles Spaniel.' It's a mouthful and they never get it. 'What kind?' After three or four times I get so sick of chewing my cabbage twice I start barking, 'He's a MUTT!'"

"I think they're just being friendly."

"I don't want friendly. I want to be left alone. For Pete's sake, I work twelve-hour days. When I take a break I need peace and quiet."

"Peace and quiet? You live in New York City! Maybe you need to work less so you won't be so cranky."

* * *
Buddy came into my life seven years ago, right after a devastating split. I'd found out the guy was married and the breakup nearly broke me. I felt splintered, defective, and out-of-order. Depression yanked me down and that's where I stayed, wallowing.

One day, still telling everyone who'd listen how doomed I was, I ran into a neighbor who said. "You need a puppy. It'll change everything." I looked down at her dog. "He's a Blenheim Cavalier King Charles Spaniel," she said proudly."

He had soft white fur with cow-like patches of auburn brown. His ears flopped like a beagle. He looked about the size of a cocker spaniel, but shrunken like a T-shirt in a dryer. His long lashes and dark eyes made him look like Bambi. When I smiled at him his tail wagged frantically and rhythmically like a windshield wiper.

I mulled over my neighbor's suggestion. I called Maddy to discuss. "Puppies are a huge responsibility. You have to be home all the time." I said.

"You're home all the time anyway!"

Hmm, she had a point. I work at my Mac in my living room. My only commute is to trek to the kitchen for snacks. I began to weigh the pros and cons of getting a dog. I thought about my ex and how much I'd wanted a baby with him. I ruminated. Pets are expensive—con. The cost of a dog pales in comparison to raising a kid. There'd be no braces—pro. No college tuition—Pro. He'd never wreck a car—Pro! Pro!

The next time I ran into my neighbor I asked her where she'd gotten her dog. She raved about a high quality breeder.

Instead of What to Expect When You're Expecting, I read How to Raise Your Cavalier and The Owner's Guide to the Cavalier King Charles Spaniel. I read both books in two days and decided to name the dog after my Uncle Buddy. I was nervous and excited and hopeful, like I'd felt before my first date with my no-good ex.

Preparing for this new pup made life joyful. Sort of—when any couple walked by I still seethed with envy.

My big day arrived. I went to pick up my doggie. The gates were down. I peered in the window and saw a teeny-tiny Cavalier the size of a Beanie Baby. The second our eyes met I knew he was mine. He looked scared and vulnerable and all I wanted to do was keep him safe. The owner pulled up the gate and I bee-lined to the crate. Buddy was placed in my arms. I held him to my chest cradling his itty-bitty head.

I carted him around in my purse and smuggled him into movies. This warm bundle challenged my sulking. On Saturday nights, when loneliness descended like a shroud over my living room, I played with my pup, reconciled to becoming one of those single old ladies who "married" her pet.

Buddy became a balm that soothed. He slept pressed against me and I'd lie awake to listen to his puppy snores.

Sharing him with someone even for an instant, especially a stranger in the street, felt like a band-aid yanked off a burn.

I was accosted when I walked him, like stars and their paparazzi.

"Where did you get him?"

"What kind of dog is that?"

I couldn't stand all the questions. Sometimes I spoke Russian-sounding gibberish, 'I g'no shpeak Eenglish.'

Other times I pointed to my mouth like I couldn't talk because I was eating. People ogled. I snapped, "Move, can't you see I'm walking here?"

Then one day, for the millionth time, somebody tried to pet my dog. I didn't even look up. Just yanked Buddy closer to me and grumbled, "Leave us alone, we're busy."

As I was walking away I heard the guy mutter, "Geez, I'm busy too. I just wanted to say hello."

I stopped. Suddenly I saw who I'd become and felt ashamed. I turned to apologize to the man but he was already crossing the street. I watched this handsome man walk away in his tasteful suit and could've kicked myself. I'd whined to my friend, Maddy, the day before, "I'll never meet a man." Her response now reverberated in my head. "It would be much easier to meet a guy if you weren't walking around pissed off and in a hurry."

Buddy and I strolled to Madison Square Park and a breeze went through my hair. I decided that I didn't want to end up a bitter, irascible, curmudgeon. As we walked toward the dog-run Buddy tugged excitedly toward a nice looking dude with a pooch. My anger and disappointment with the world lifted for a moment. I smiled and found myself saying, "Excuse me, what kind of dog is that?"