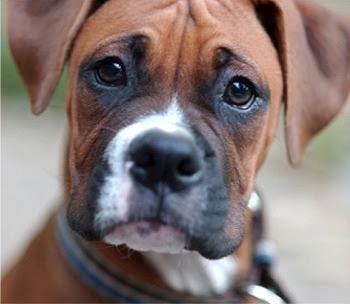 As a huge supporter and believer in service dogs, I read this story from Petside.com yesterday and was greatly disturbed.  In Mississippi, a teacher who is a Type 1 Diabetic, has been denied repeatedly to bring her Diabetic Alert Dog into the classroom with her.

The teacher, 29-year-old Christina McCurdy, uses her female boxer, Jinx, as a Diabetic Alert service dog. The dog is trained to alert McCurdy when her blood sugar is dropping, something she says she cannot tell the majority of the time. The huge swings in McCurdy's blood sugar levels could lead to seizures, organ damage and even death.

As a result of her condition, McCurdy has continuously lobbied her school district to allow her to bring her pup Jinx into the classroom. She's been denied repeatedly, and she still has not received an answer as to why.

In McCurdy's estimation, her dog Jinx is purely a service dog in the same fashion that a seeing-eye dog is. While dogs have been helping the blind for many years, diabetic alert dogs are a relatively new trend. They rely on scent to sense when blood sugar is dropping.

I think this is just wrong and to even suggest that these "types" of  service dogs are not "real" service dogs is ridiculous.  Though it has taken humans a while to figure out exactly what our four-legged friends can help us with, dogs have been alerting people on dropping blood sugar levels, cancer, epileptic seizures and many other things for a long time.  Their noses can do things ours simply cannot.  Trained bomb dogs can go into a huge warehouse and find the slightest scent of bomb materials, that is a pretty impressive nose!
This story is disappointing to me and I think the school board that is denying the dog to work in the classroom should at the very least fully explain why they continue to deny it.  Otherwise, one is left to believe this is pure ignorance in play or some sort of discrimination.
To read the full original story, bark on the link:  Bark!