Open Letter To An Expecting Mother 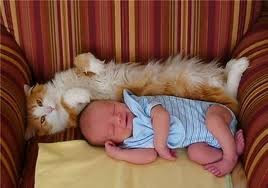 I read a provoking open letter to an expecting mother on Petside this morning.  The issue is that the mother to be is giving away her 8 year old cat for no apparent reason other than she is expecting a baby.  This is a hot topic, there are many mothers or couples that decide when the baby comes to get rid of the pet.  Sometimes this is a choice that cannot be helped for a variety of reasons, but sometimes it is just a choice of convenience or misinformation.  I have no tolerance for people that dispose of their pets for no reason, so I found this letter to be entertaining and thought provoking.  Have a read and see what you think, one warning, it does get on the bitter side.

I saw your email in the evening. It came over our building’s email listserv. It went like this:

We are expecting in November, and I am looking for a home for our 8-year-old tomcat. He is very gentile, affectionate, and pretty low maintenance. I'm not going to resort to a shelter, so if you know of anyone who might be interested, please let me know!

I felt the blood rush to my head. So you were giving up your “baby” now that the “real baby” was arriving. But I mustn’t make assumptions. Perhaps there was something you weren’t saying. I wrote back:

Why would you give up your cat because you’re expecting? Cats are wonderful with children. I grew up with 40 indoor & outdoor :)

I thought that was nice and non-judgmental. I even added a smiley face. Perhaps you had allergies you weren’t mentioning? Could you really be giving up your cat just because a baby was on its way? Yes, I knew women who did that, unfortunately. As a long-time volunteer with a cat shelter, we heard from women wanting to give up their cat because a baby was on the way. Sometimes they were told to do it by a doctor. Toxoplasmosis, the doc would say, as if this were a certain death sentence for a fetus.

But you, pregnant lady, were already five months along. Could this really be a concern now, all of a sudden? In case it was, I thought I might advise you, as I’ve done a lot of research on it. The risk of toxoplasmosis is slim at best – it certainly doesn’t mean you had to give up your beloved cat. It only means you should be careful around cat feces– either get someone to change your cat’s litter, or wear gloves. Additionally, you can simply get your cat tested for it.

But you ignored my query. Instead, you sent out another email to the listserv. This one went:

I should also mention that he's in excellent health and is neutered.

This is when I lost it, pregnant lady. I shot back:

Sad you would give up a cat after eight years for no reason. And yes, I have a right to say this since you're on a public forum. Animals are not disposable.

Not surprisingly, you didn’t answer. How sad that you are welcoming one family member by ditching another. I imagine you will be the kind of mother who storms to school to yell at teachers who may not appreciate your child’s genius.

Or was it that you thought your “gentile” (I think you meant “gentle”) cat would suck the breath out of your newborn’s lungs like in old cartoons? Perhaps you were the kind of pregnant woman who screamed if you spotted a plate of brie.

Maybe I just don’t understand the sort of raging anti-pet hormones that may have surged through your blood during your pregnancy. I once met a man who told me that his ex-wife insisted they get rid of their elderly three-legged dog when she got pregnant: The same elderly three-legged dog that had never shown one ounce of aggression. The man said he refused. And after their baby was born, she came to her senses. Too bad you don’t have someone also willing to reality check you.

Don’t you know that kids who grow up with a pet in the house have less illnesses and respiratory issues?   Perhaps you just don’t care.

And that shelter you won’t “resort” to? Shelters carefully screen all potential adopters. Shelters interview applicants and check vet records and visit homes. I would sooner “resort” to a shelter than a building’s listserv -- full of people you’ve never even spoken to or met.
I only regret that I don’t know what you look like. If I did, I would make sure you are not one of the mommies whose whale-sized double strollers I routinely help through the lobby’s doors. Yeah, I’d let you handle that yourself. But I do know your name. And I will spread it far and wide to rescue groups. Because when your child is a toddler clamoring for a kitten, I want to make sure none of those animal shelters you will not “resort” to gives you one -- only so you can give the cat away when it suits you, just like you gave away your “gentile” one.

But mostly I feel sorry for a child born to a mother who would give up a pet for no real reason -- except that she doesn’t want it anymore. Karma has a way of coming back around. What will your child do with you when you are old and no longer fit into his life plans?

So what do you think?  Do you think that in a public forum like this you should list a reason or do you think this is a personal choice and the women is doing what she thinks is best for the cat?
Posted by Bark & Clark