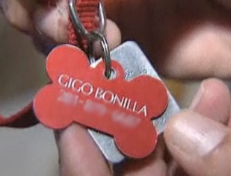 In Houston, TX an 11-year-old girl and her grandma dropped off their little poodle Gigo at a groomers.  Sounds, normal right?  Well, later in the day when the groomers did not call for them to come get the dog, the little girl and grandma returned to the groomers only to find they had no idea where their dog was.  They lost a dog in the course of a day!
The worst part of this story is that the little 11-year-old girl, Alexandra Bonilla, lost her mother last year of kidney disease, and her little white poodle helped her get through her loss and was such a comfort to her.  Her father, Salvador Bonilla, is outraged over the lost dog mainly because the groomer's have offered no explanation or apology for the loss of their dog.  They did however offer another dog, but in his and his daughter's minds, there is no replacing this dog and no amount of money to pay for her.
The full story is in the video below.  What do you think?
Posted by Bark & Clark