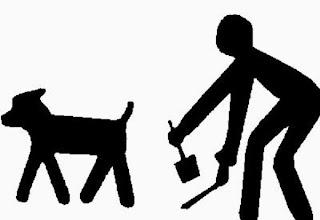 It was about a year ago when we first heard of this case against PetSmart.  Robert W. Holloway slipped on a pile of dog feces that he claims was "not visible" on his way to the treats isle in a VA store.  The lawsuit was claiming that the employees of the store were negligent because they failed to scoop the poop.  Holloway states "Upon slipping in the feces, I grabbed a hold of my daughter forcefully and wrenched my back.  The dog feces in question was not open and obvious."

Yesterday PetSmart finally settled this suit, the details are not disclosed but the suit was for $1 million.  PetSmart denied any wrongdoing and said Holloway did not fall down and was not injured as a result of slipping.  The store's attorney also said in a court filing that an employee was on her way to clean up the mess.

I guess what we can all take away from this is yet another lesson on what to do when our pooches have to go... CLEAN IT UP!  I feel for PetSmart because even though the store allows animals into the store (why wouldn't they?) that does not mean that we as owners get a free pass on our duties.  Of course, there is a possibility that the person didn't have a bag on them and they notified the store asap and did all they could.  But there is that cynical side of me that really doubts that.  I see it all the time when I am in stores that allow animals or even in my obedience classes.  The dog goes pee or poop and the owners act as if it is not their responsibility to do anything about it.  If it is in my class, I honestly don't mind cleaning it up, but it is at least a nice gesture to offer to clean it yourself.  I know that in times I've been in that situation, I have always cleaned up after my dog.  Now I will for certain, when the companies stop paying, I believe the owners will be the next in line to be sued for such incidents. The best practice is to just clean it yourself or stick around until someone gets there and keep everyone else out of it.

For more information about the PetSmart suit, bark on the link:  Bark!
Posted by Bark & Clark