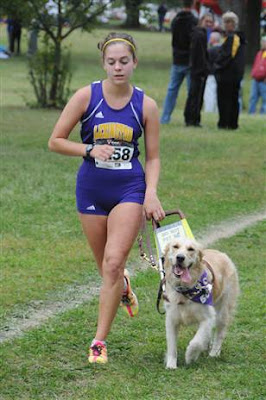 This is an amazing story that was sent to me from MSNBC.com about a teen that is legally blind but loves to run.  Now, her guide dog has made it possible for her to continue to do the thing she loves most.  Enjoy the read.


Sami Stoner is running proof that adversity doesn’t have to keep you from the finish line.
A legally blind 16-year-old runner, Sami is traversing cross-country courses this season with her new guide dog, Chloe, and is believed to be the first high school athlete in her home state of Ohio to compete with an animal.

“I don’t run for time or place or anything, I just run because I love it, and I’m glad I can share my love of running with Chloe now,” says Sami, a junior at Lexington High School who’s on the junior varsity cross country team. “I love having Chloe. She’s helped me so much.”

Now in her fourth year running cross country, Sami won a waiver from the state high school athletic association that allows her to compete with a dog. The golden retriever puppy, who guides Sami through the crowded hallways at school, also takes her safely through the running trails of Ohio.

“She watches out for roots and she tries to pick the clearest path for me,” Sami says cheerfully. “The ways she moves, I can feel it in her harness, so she has little ways to signal which way to go and what to do.”

At the starting line, Sami and Chloe stay back 20 to 30 seconds so Chloe doesn’t get spiked by another runner, but they’re usually passing other competitors by the first mile on the 5-kilometer (3.1-mile) course. Sami is ineligible to score, and she must avoid finish-line chutes if they’re deemed too narrow, said Dale Gabor, the director of cross country and track and field for the Ohio High School Athletic Association.

“She gives a lot of hope to other kids,” said Gabor, who approved Sami's waiver and believes she's the first scholastic athlete in Ohio to compete with an animal.

Running with just some peripheral vision is scary, Sami says. But Chloe is highly focused, which has helped Sami feel secure enough to improve her personal record to 29:53.

“There is still a little element of being terrified you’re going to fall flat on your face,” Sami says. “She’s given me a lot more confidence in my running.”

Her dad, too, is wary when Sami, the youngest of his three girls, starts a race.


“It’s an amazing, scary thing to see her take off and all you can do it pray that everybody comes back safely. This is my baby,” says Keith Stoner. “She’s not necessarily up there collecting a medal at end of the race, but in our heart she does win them all.”

Sami began running cross-country in eighth grade, and by the end of that school year, her vision deteriorated and she became legally blind. She was found to have the untreatable Stargardt disease, which is similar to sight-robbing macular degeneration that affects older adults.

In high school, she worried she wouldn’t be able to compete, but teamed up with a friend, Hannah Ticoras, who ran alongside her as a guide.

“All I wanted to do was run, and running with Hannah gave me that opportunity,” says Sami.

But Hannah graduated at the end of Sami’s sophomore year, again putting Sami’s competitive future in limbo. Her mobility teacher thought she’d be a good candidate for a guide dog, and after a month of training over the summer, the Stoner family welcomed Chloe home in August.

Sami is grateful she’s still a part of the team she loves so dearly.

“I just hope people learn that just because you have a disability or some kind of disadvantage that it’s not the end of the world,” says Sami, who has a 4.0 grade point average this year. “You can still do stuff, you just have to find a way of doing it.”


For the original story, bark on the link:   Bark!
Posted by Bark & Clark