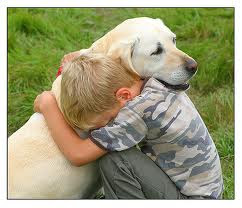 According to a study done by the University of London, dogs feel human's pain.  Not just their owners, but all humans.  Does this come as a surprise to you?  I have to say, it doesn't to me at all.  My entire life I have been around dogs and throughout this time I cried to them, sighed, listened to the saddest music and moped and if there was a dog around (not necessarily my dog) they would find their way to me to snuggle or lick my face or some other comforting move.

When I read this story about the research done in London on Dogster this morning, I couldn't help but smile.  The more we research the more we find that dogs ARE able to do many things that were always said they couldn't.  I hope you enjoy this article and you find it as interesting and pleasing as I did.

Has your dog given you a furry shoulder to cry on? Turns out many are conditioned to comfort humans, even when they are complete strangers.

Sniffle or sigh within earshot of your dog. Nine times out of 10, the ears flick and a worried glance comes your way. Sob, and within seconds comes a nuzzle, a snuggle, a caring gaze, a comforting paw on your shoulder or knee.

Our dogs feel our pain. But according to a new study released last week, dogs feel the pain not merely of their owners but of all human beings -- because thousands of years of domestication have wired them to do so.

University of London psychology researchers Deborah Custance and Jennifer Mayer created an experiment in which 18 pet dogs, spanning a range of ages and breeds, were exposed to four separate situations in which for 20 continuous seconds "either the dog's owner or an unfamiliar person pretended to cry, hummed in an odd manner, or carried out a casual conversation," according to a University of London press release.

These sessions were filmed, and the footage was studied by the research team.

"The humming was designed to be a relatively novel behavior, which might be likely to pique the dogs' curiosity. The fact that the dogs differentiated between crying and humming indicates that their response to crying was not purely driven by curiosity," Custance explained. "Rather, the crying carried greater emotional meaning for the dogs and provoked a stronger overall response than either humming or talking."

The researchers found it particularly significant that the dogs responded to crying people regardless of whether those people were their owners or strangers. According to the Daily Mail, "the youngest dog in the experiment was an 8-month-old yellow Labrador which was absorbed in chasing its tail until someone pretended to cry, and then it rushed up and put its paws on her shoulder."

"If the dogs' approaches during the crying condition were motivated by self-oriented comfort-seeking, they would be more likely to approach their usual source of comfort, their owner, rather than the stranger," Mayer said. "No such preference was found. The dogs approached whoever was crying regardless of their identity. Thus they were responding to the person's emotion, not their own needs, which is suggestive of empathic-like comfort-offering behavior."

According to the Daily Mail, Mayer described this as "relatively sophisticated behavior which puts dogs on a par with toddlers, who will try to comfort someone in distress by hugging them or giving them a toy."

Upon hearing strangers cry, the dogs were given the option of approaching their owners or the crying strangers. They approached the crying strangers -- sniffing, nuzzling, and licking the strangers, according to Mayer and Custance. While this behavior gives every appearance of empathy and concern, the researchers warn that it could also be "interpreted as emotional contagion coupled with a previous learning history in which they have been rewarded for approaching distressed human companions."

In other words: It's possible that on past occasions when you wept, your dog soothed you. Grateful for this comfort, you patted your dog and offered up some cookies and a walk. Henceforth, to your dog, the sound of sorrow signifies cookies and a walk.

But it feels so much better to us to believe that they care, yes?

No matter if you believe this study shows that dogs are capable of caring and showing empathy or if it is just as simple as a Pavlovian response... they are intelligent beings none the less!