Elicia Calhoun and Her Dogs 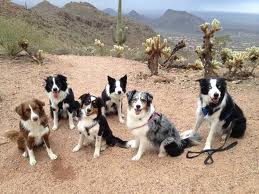 Yesterday a friend asked me if I had heard about the dog training woman and her dogs.  At the time I had no idea what she was talking about.  With a couple of searches on Facebook, my eyes were opened to the tragedy that occurred on I-10 near Wilcox, AZ in the early morning hours of Monday, June 11th.  Below is the story.

A well-known Valley dog trainer has found her missing dog after a crash in southeastern Arizona killed two others.


Elicia Calhoun's show dog, Tobie, was thrown from her car Monday during a car accident and wasn't seen since.

According to Amber Abbott in a Facebook group created to help find Tobie, she was found alive around 9 a.m. Tuesday.

"She looks good! She has had a bottle of water and is in Elicia's arm," Abbott wrote. "They are on the way to the vet."

Calhoun said she checked out of the hospital and slept in the desert Monday. Her search started again Tuesday morning with the help of volunteers.

Calhoun fell asleep at the wheel Monday resulting in a crash.

Calhoun is a nationally known agility trainer based in the Valley.

As of Tuesday morning, roughly 4,600 people had joined the Facebook group. Volunteers said they collected $15,000 to help with the search.

Calhoun said airplanes are flying over the desert to search for Tobie.

This past weekend she and her dogs were at a competition in Odessa, Texas.

Calhoun was driving home early Monday morning along I-10 near Willcox.

Her 2007 Hyundai crossover hit an 18-wheeler semi truck and rolled over several times. All six of Calhoun's dogs were ejected upon impact.

Three dogs suffered serious injuries but are expected to survive.

However, a 13-week-old puppy died instantly and two others went missing.

Calhoun checked herself out of the hospital with a punctured lung to go looking for her missing dogs.

Nika, a border collie, was found dead around 7 p.m. Monday. Calhoun says Nika was hit by a car.

Calhoun and her volunteers set up camp on the I-10 until Tobie was found.

"Right now they are my life," said Calhoun on Monday. "I would do anything to get them back. I would trade my life for theirs. I will not leave this area until I know where my dogs are."
You can check out the Facebook group established to help Calhoun find her dogs, or the fundraiser to assist in her recovery.

So, to bring you up to date, all the dogs have been accounted for and besides the two that were lost, they are all recovering well.  As well, Elicia has checked back into the hospital and is resting and recovering.

This entire thing has me thinking, what would I do if this happened to me and my dog.  I totally understand her checking herself out of the hospital and going to find her dogs.  I would do the same thing!  But it also has me thinking about what I need to do in case something like this happens.  For instance, keeping all of Neville's info (including vet records) in my glove compartment and having an emergency kit in my car.  Things I have been say "I need to do", but have yet to do it.

We get comfortable in our routines, but you really never know when something is going to happen.  I am so happy for Elicia that she found all of her dogs, yet I am so sad for her that she lost two.  I can't imagine the pain she is in, but I hope her and her remaining dogs find strength and love together and have a speedy recovery.
Posted by Bark & Clark