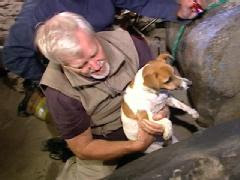 It took a team of firefighters, lifeguards, a veterinarian, County Department of Animal Services personnel, and the bomb squad to rescue a little 7-year-old Jack Russel out from under a pile of rocks and boulders yesterday in La Jolla.  The pup, Fuji, was chasing a rodent and got himself stuck.  The team tried everything to loosen Fuji up and slip her out, including use vegetable oil.  They finally tranquilized her and got a fiber optic camera lowered in to see how to get her out.  This was the trick that worked and after nearly 30 hours, the team freed Fuji.
Ruth Guymer, Fuji's owner,  was relieved to hold Fuji in her arms again.  The family dog had flown here all the way from Australia when the family moved to La Jolla.  Guymer was very thankful to all the people that helped rescued her dear Fuji.
Fuji was rushed to emergency animal hospital in Mission Valley where she was checked out.  No further reports have been given.
Below is a video of the rescue.

To view more on this story, bark on the link:  Bark!
Posted by Bark & Clark