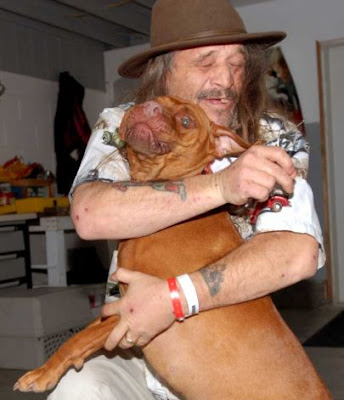 I can't imagine being in a place where the thought of eating my dog would actually come into my head.  But then again, I have never been lost in the middle of a forest for six days with no food or water.  That is exactly what happened to this Gold Beach, Oregon family.  Dan and Belinda Conne along with their 25-year-old son Michael and dog, Jesse, all went into the Rogue River-Siskiyou National Forest to do some mushroom picking.  During their adventure they became badly lost.

Over the next six days they were struggling to survive as they could not start a fire and had no food.  It was at the height of their desperation that Dan Conne began to think that Jesse, his four-legged companion could become a source of protein for he and his family. “She’s that good a dog, she’d have done it, too,” said Conne, 47.

Thankfully, before the family had to make such a horrible decision, they were able to get the attention of the rescue helicopter by using suns reflection against a blade of a knife and dead cell phone.  "The wife had the Blackberry and I had the knife," Dan Conne told The Associated Press. "I kept flashing. The wife said, 'You're blinding them.' But I wanted to make sure they seen us. I wasn't taking no chance."

The three humans were air lifted to the nearest hospital and Jesse was walked out by a ground rescue team.  Once Dan Conne was released from the hospital, he picked Jesse up at the animal shelter where she was sent.  Needless to say, she was very happy to see him.

I know it is easy to read this story and think how awful this person must be to think of eating his dog.  But think about the desperate situation he was in.  I don't know what I would do if I were in his shoes.  I am pretty sure there is no way I could do that, I would find another way to survive.  But I think it is hard to know what you would do if you think you are going to die.  What do you think?

For the full story, with many more details, bark on the link:  BARK!