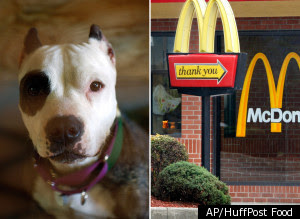 McDonald's seems to always be in the hot spot, if it isn't what their meat is actually made of, it is something else.  Today I read that they had a spot running on the radio that really offended dog lovers, Pit Bull lovers to be specific.

The spot is an ad for the new chicken McBites.  They are making comparisons of risky behaviors vs. trying the new McBites.  One of the many "risky" behaviors listed is petting a stray Pit Bull.  Listen below:

Once McDonald's felt the heat the put out a statement via twitter that said:  “We didn’t mean to offend anyone and the ad is being pulled.”  However, the promotion is said to have ended on February 5th anyway.

I think when we have a win, we take it.  They apologized and pulled the ad, what more can  we ask for.  The silly part is that they could've said pet a stray dog and ended it there and we probably wouldn't have been so offended.  But adding fuel to a fire that is trying to be put out just shows how uneducated in the way of dog breeds the people creating these ads are.

For all the details of the story, bark on the link:  BARK!
Posted by Bark & Clark