Puppy Classes to Start In DTLA! 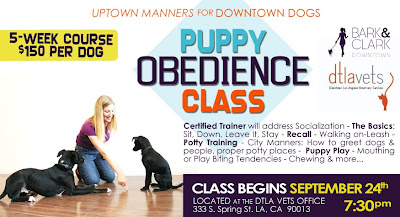 Bark & Clark has teamed up with the amazing DTLA Vets to bring you a 5 week session of Puppy Obedience Class!  This has been the most requested class from my clients, but up until now, my choices of locations just never worked out.  That has all changed.

As of September 24th, Bark & Clark will be offering a 5 week session of Puppy Obedience Group Training at the DTLA Vets office (333 S Spring St, L.A., CA 90013)!  You can't get more clean and safe than that!

We will be meeting for 1 - 1.5 hours each Tuesday night  @ 7:30pm for 5 weeks.  During this time I will be instructing you and your pups on a variety of common puppy problems.  For $150 per pup, this is what you will get:

This class will also include a play session for your pups at the beginning of every class to work on their socialization and to teach them proper interaction.

This class is a great way to start off your relationship with your dog.  My training style is all about having control over your dog, but also having a dynamic relationship that will be based on love and mutual respect and the best way to get there is to start from day one.

Join us for Puppy Obedience Class!  The class is most appropriate for pups up to 7 months old.

Space is limited, so sign up today!
Posted by Bark & Clark

The Way to Make a Trainer's Day! 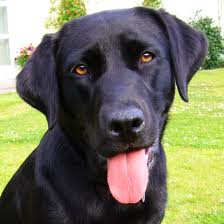 A week ago my day was off to a less than perfect start, bad traffic, lack of sleep, and generally not in a great mood.  Before heading into an appointment, I stopped and checked my email.  I am so glad I did.  I found in my inbox an update on one of my favorite clients (both human and dog) that not only made my day, but my whole week (maybe longer, we will see).

I have been working with these clients since the beginning of this year and considering the severity of the human and dog aggression this dog had, that isn't very long.  But they were superstars and did what even I didn't think was possible.

The dog, this beautiful black lab, had fear based aggression toward humans and dogs, as well, due to his fear he was pulling awfully and was not a pleasure to take new places.  Additionally, due to his breed, everyone thought he would be friendly, which proved to be very trying for his owner.

When we first started working together, my expectations were low.  Especially since during the 2nd training he still was offering to bite me.  But then something changed by the 3rd session.  The training started to kick in and he let go.  For his owner, she felt empowered.

We continued to work week after week, seeing steady progress in our behavior modification.  Then the dog came into a group class and did fantastic.  Then came multiple Pooch Parades.  Each time I saw him, the progress was astounding.

I have not worked privately with the pair for months now.  All communication is through email and phone or at my Pooch Parades.  I had just seen them at my last Pooch Parade and the dog was amazing!  Things I was certain he would react to he did not.  I didn't think I could be more proud... I was wrong.

A week ago this client wrote me an update email on her dog, the email's subject was Success!  She explained that her sister and baby niece came to visit.  She thought about putting her dog in boarding, but something told her to try.  So she introduced her dog to her sister and niece.  It took about an hour for him to calm down and accept her sister, but he loved her niece from the moment they meant!  She also explained that they took him everywhere and he was a perfect gentlemen.  She included pictures of her amazing dog and niece, side by side.  This all brought tears to my eyes!

To think that a dog that couldn't accept a strangers touch or accept a stranger in his home was able after just an hour to be responsive and calm.  A dog that was frightened of children and new areas, now able to play and enjoy a baby and go all over L.A. site seeing!  To say I am proud does not do it justice.  I am so happy for these two because they worked so hard.  Not just the human, not just the dog... together they worked as a team.

I said at the beginning of my blog that they were two of my favorite clients and they are, but what makes them two of my favorites is their dedication to this process and the phenomenal relationship they have.

I didn't use names or pictures in this blog, but you know who you are!  Thank you!
Posted by Bark & Clark