Are you kicking yourself that you didn't join the Puppy Obedience Class?  Well, here is your chance, we have a new class starting on NOVEMBER 5TH!  Sign up today! 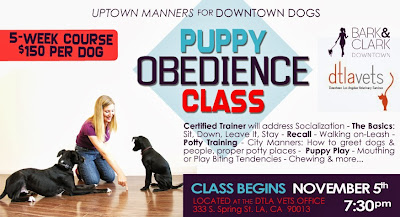 This class is appropriate for all puppies up to 7 months of age and that have had their first two rounds of DAPP vaccines.  You will learn all the basics to set your pup up for a lifetime of success.

The commands we cover are sit, down, stay, recall (come when called),  and leave it.  We address all the basic issues of raising a puppy in the city like potty training, safety, how to play with people and other dogs, where to potty, how to walk on a leash and so much more.

Each class will begin with a play session to help socialize your pup with other dogs and by the end of the 5 weeks you will have learned how to keep their attention on you and not all the distractions.

Sign up today, class starts on November 5th @ 7:30pm at the DTLA Vets office.  Only a limited number are permitted, so be sure to register by contacting me.  Just give us a bark!

I read the story below on Dogster and it made me think a lot about the mind of a hoarder/animal abuser.  Let's not sugar coat this, an animal hoarder is an abuser.  This is not about intention, this is about what consequences your actions are causing.  Here is the story, let's see what consequences were involved for this individual that has been chronically hoarding and abusing dogs for 25 years:

Warning: This one is not for the faint of heart.

A woman who was missing is now believed dead, possibly eaten by the "dozens of hybrid wolf-dogs" she kept in her backyard, according to NBC News. Authorities found a human skull and a jawbone on Patricia Ritz's property in Kentucky -- and as many as 50 dogs -- when they visited after neighbors reported not having seen her for days.

The dog were hungry. Investigators believe Ritz died of an illness and the dogs consumed her remains to survive.

"I think it was just one lady that really wanted to save them all," Tracey Ward, a county animal control official, told NBC News. "When you don't spay and neuter, they're going to breed. It's not going to be just one or two puppies ― it's going to be seven, nine, 12."
Fifty may seem like a lot of dogs, but to Ritz, it was nothing. She had a history of keeping far too many dogs to properly care for, with a string of animal cruelty charges and convictions extending back 25 years.

Of the 50 dogs found this time around, many are puppies, and others are "extremely pregnant." Some were in cages and many were running free. Most were thin and hungry, while a few were dead.

"After the sadness, there was relief," Mary Beth Kolb of Adopt-a-Husky told WFIE. "There absolutely was relief that this will never happen again."

Animal control is still recovering the dogs and getting them the vet care they need. They're also looking for volunteers in the hope of getting the dogs to an animal sanctuary, according to WFIE.

Death is nothing to celebrate, no matter how much we may disagree with the actions of the person.  But I completely understand the comment above about being relieved at the news of this woman's death.

This is a case that I find very interesting and I think we get to understand the mind of this type of abuser.  Hoarders are unique abusers because they believe they are helping the animals.  That they are providing some sort of care and correct environment that no one else can provide.  Unfortunately for the animals, this is never the case.  The person is mentally ill and has no understanding of the hole they have dug themselves into.  Nor do they understand the poor condition of their animals.

The most unfortunate part is that a majority of these animals cannot be rehabilitated for one reason or the other.  Where at one time they had the chance for a new life, once in this hoarder environment for an extended amount of time, that chance is gone.   There are animals that defy the odds and make it through and are wonderful.  I have had the amazing experience to train some of these extraordinary dogs.  But that is the point, they are extraordinary, not the norm.

No matter the breed, all dogs, all animals deserve to have a second chance at life when the first one was ruined for them.  The story above makes me so sad for all these dogs that this one woman destroyed.  Now there are 50+ others whose fate is unknown, some of which are puppies.

If you see abuse of any sort, hoarding, hitting, starving, mistreatment in any way, please report this.  I don't care if this is family, friends, neighbors or a stranger on the street.  Animals can't speak, it is our job as humans to be their voice.