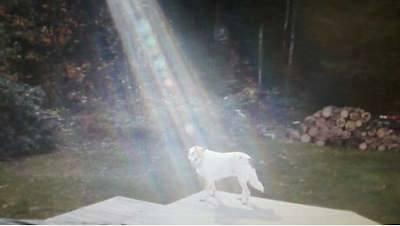 I thought since we have officially moved into the Christmas holiday time with everything from the store displays to the holiday stories and movies on T.V., it would be appropriate to share this amazing story from Dogster.  Decide for yourself if this is a miracle sky that happened right in front of this photographer or just a beautiful interplay between light and the camera lens. 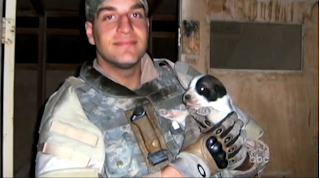 On the day before he was killed by an IED in Iraq, Justin Rollins found a litter of puppies living with their mom in a portable toilet in Iraq. He and others in his Army squad were smitten, and spent time holding and snuggling with the pups. Someone took several photos of Rollins with a couple of the pups. He couldn’t wait to send them to his fiancee back in New Hampshire. He told her she was going to love the photos. He didn’t tell her what the subject matter was, so it would be a surprise.

But before she could look at the email, terrible news came. Rollins had been killed by an IED. At the funeral two weeks later, top brass asked Rollins’ grieving parents if they could do anything for them. They had one wish: To get one of the pups their son had held, a pup that had made him so happy just the day before he died. It was a tall order, and by a miracle (and a lot of lobbying by congressmen and others with clout), it happened. Hero made it back to New Hampshire, where she lives a heavenly life with his parents.

Mom Rhonda says the dog sometimes looks at her in such a way that she wonders if her son’s spirit is somehow in the dog. She has always had a deep connection with her son. In an ABC story, she says that at 6:30 a.m. on the day he was killed, she was getting ready for work and she felt a big jolt go through her. She worried it had something to do with Justin. It turns out that he died at pretty much that moment in Iraq.

ABC News was recently at the Rollins’ parents’ home taping part of the story of Justin and Hero. During the session, video cameras captured footage of a beam of sunshine enveloping Hero. It’s the kind of sunshine some people call a “miracle sky.” 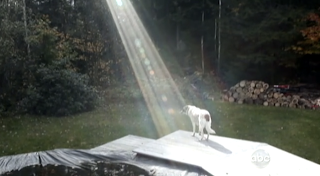 The moment was not lost on ABC News’ Kimberly Launier, who was holding one of the cameras:

“All of a sudden, the clouds broke and a light began to solidify in a beam directly down on Hero — a kind of vertical halo. As this dramatic ray of light was shining on Hero she turned to look at me, and it was all I could do to hold the camera steady and not drop it in astonishment.

“It was an unforgettable moment, and made me wonder if in fact Justin was in there. Then the light vanished.”

The moment didn’t surprise Justin’s parents. “I truly, truly believe I’ll see him again,” said dad Skip, “because he sent us a sign so many times that, that he’s OK things that are too astronomical to not believe.”