Taiwan Photographer On A Crusade To Save Dogs 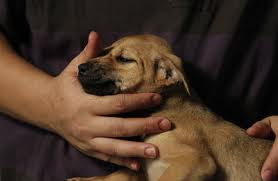 A friend of mine told me of this story on Yahoo News about a photographer in Taiwan that is on a crusade to save doomed shelter dogs.  He is photographing them one last time right before they are euthanized.  This could be their last day or even their last minutes before they are taken away.  I know this is a hot topic because there is such passionate views.  But no matter what you think about euthanization, I think you will agree the way he is photographing them, is beautiful and makes you understand what a waste this is.

Please read the story and more than that, go see the few photos they have available at the link below.  I am sure that some of these dogs are sick and some are perfectly fine, but the way he shot these dogs to look so "human" is pretty remarkable.

The photographer gingerly places a small, mixed-breed puppy on a platform in his makeshift studio at an animal shelter in northern Taiwan. The dog looks about 2 months old, with alert, trusting eyes and a shiny black coat.


Tou Chih-kang captures expressions, personality. He creates the kind of photos that any pet owner would love to have.

This puppy has no owner and will not get one. Once its photo shoot is over, it will be taken away by vets to be put down.

Tou has been recording the last moments of canines at the Taoyuan Animal Shelter for two years. He has captured the images of some 400 dogs, most of which were pets abandoned by their owners. To him the work is distressing, but he's trying to spread a message of responsibility.

"I believe something should not be told but should be felt," says Tou, a thick-bodied 37-year-old with an air of quiet confidence. "And I hope these images will arouse the viewers to contemplate and feel for these unfortunate lives, and understand the inhumanity we the society are putting them through."

His photographs are redolent of the kind of formal portraits — of people — that were taken 100 years ago, designed to bestow dignity and prestige upon the subject. In many of the dog portraits, the animals are placed at angles that make them look almost human.

This year Taiwanese authorities will euthanize an estimated 80,000 stray dogs. Animal-welfare advocates say the relatively widespread nature of the phenomenon — Taiwan's human population is only 23 million — reflects the still immature nature of the island's dog-owning culture and the belief among some of its majority Buddhist population that dogs are reincarnated humans who behaved badly in a previous life.

It would seem, judging by the many stores in Taiwan that sell fancy dog clothes and other baubles, as if Taiwanese fawn over their animals, and some do. But others abandon pets to the streets once their initial enthusiasm cools.

"Animals are seen just as playthings, not to be taken seriously," says Grace Gabriel, Asia regional director of the Massachusetts-based International Fund for Animal Welfare.
Activists say that some 70 percent of dogs in Taiwanese shelters are killed after a 12-day waiting period, despite government efforts to find them homes. Gabriel says dogs in U.S. shelters are less likely to be euthanized, though millions of cats continue to be put down there each year.

The dogs who wind up in Taoyuan are picked up by roving patrols, funded by local governments, of workers equipped with large nets.

The dogs come in all sizes and shapes. Some are young and active, others grizzled, listless and battered. After Tou photographs them, veterinary workers take them for a brief turn around a grassy courtyard before leading them into a small, clinical-looking room where they are killed by lethal injection.

Tou, who uses the professional name Tou Yun-fei, says he began his project because the Taiwanese media were not paying enough attention to the dogs' plight. He says he doesn't believe in having pets, but the problem had long plagued his conscience.

He says that while some of his friends refuse to even look at his photographs, others say the images taught them to take pet ownership more seriously.

A handful of the some 40,000 dog pictures Tou has taken are due to be exhibited this August in his first full-scale show, at the Fine Arts Museum in the southern Taiwanese city of Kaohsiung.

A few photos already are on display at Taoyuan city hall, part of a bid to raise citizens' awareness of the responsibilities that come with raising a pet.

"I am a medium that through my photography, more people will be aware of this issue," he says. "I think that's my role."
Tou's photographs can be viewed at http://www.fotovisura.com/user/crepe/view/memento-mori-2

For the original story, bark on the link:  BARK!
Posted by Bark & Clark