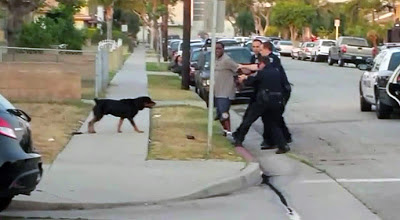 For the past week or so, this has been a very hot topic that has evoked a lot of emotion from everyone!  Hawthorne police shot a 2 year old Rottweiler named Max right after arresting the dog's owner.  The video of this event has gone viral.  I have many feelings about this incident that range from absolute rage to complete sadness.   What it all boils down to for me is that it is very clear that these officers have little to no training when it comes to dealing with dogs.  Further, if you shoot to kill, I would hope that you would just kill the animal, don't let it flop around in the street writhing in pain. That was the cruelest part of this entire video.

Now, there is a lot to be said for the parent or owner of the dog.  His loss is tremendous and no matter what he did, his dog didn't deserve to die, especially not in this way.  He was in a place he shouldn't have been and he obviously was getting involved in something he shouldn't, fine.  He then put his dog in the car, but the windows were rolled down.  I don't know of too many dogs that would stay in a car as their owners are in distress.   When I watched the video, I just wanted to hit rewind and have him roll up his windows, maybe this whole thing could have been avoided.  But hindsight is 20/20. 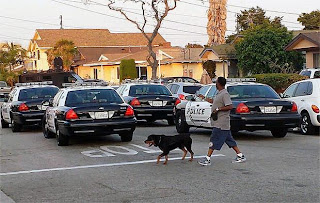 What I take most issue with is the manner in which Max was killed.  I understand that the officer is saying that the dog was a threat to his life and therefore he had to kill the dog.  But I do not understand the pain and suffering.  If a dog comes at you and you shoot to kill, why so many shots and why did the dog not die immediately, why was the dog left in such intense pain and agony for the last moments of his life?  It makes no sense at all.   The fact is, that situation didn't have to have a gun involved at all, there was another way to handle it indeed.  But that would require the LAPD or Hawthorne PD to be EDUCATED in this manner.  They should be able to read what it meant by him lunging forward and recoiling, the uncertainty in his movements and patterns.  This was not a viscous dog, this was a young dog that thought the officers were hurting his owner, so with his owner in distress, Max went to help or protect his owner.  The dog was doing what he thought he had to.  Something that most dogs I know would do for their owners. 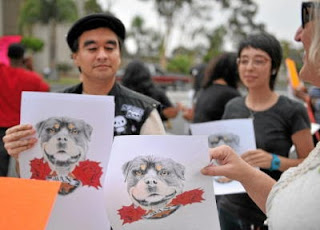 I've watched this video once and that was one too many.  It makes my heart hurt watching it.

There is an update to this story, Dogster published it this morning.  Below is that article with links to the original video and the Anonymous threat that the Hawthorne Police have received.

Last week, we told you about the horrific police shooting of a Rottweiler named Max in front of his owner, an act that was captured on video. Public outrage over the incident, which was immediate, has not slowed. However, many people are crossing the line with death threats against the officers. On Wednesday, four days after the shooting on Wednesday, the department pulled the three officers who appeared in the video from street duty.
Hawthorne, California, police Lt. Scott Swain said the decision stemmed from a "an inundation of threats over the telephone, on Facebook, and in emails," according to the Daily Breeze.

The video of the incident has gone viral, and public outrage continues to grow. You can watch the video here. We don't recommend doing so. It's graphic and hard to watch.
"I understand that people have been affected by this video. Anyone would be," Swain said. "The police officers involved are affected by this incident and having to kill a dog. I don't understand how it translates into an eye for an eye. 'We are going to kill you and your family because of this incident.' Like in my case. I wasn't even working that night."
"There's been death threats," he said. "You'd like to believe that maybe some of the people are just venting, but then you've got to be realistic -- there are crazy people out there."
Anonymous, the computer hacking activist group, has also jumped into the fray, vowing to target the Hawthorne Police Department, according to the Daily Breeze. In a video posted to YouTube Wednesday, a person in a Guy Fawkes mask (commonly used by members), reads from a statement saying that the shooting is "unacceptable" and vows retaliation.

"Police of Hawthorne you must know that you are our primary target," the person says in a digitally altered voice. "This matter will not remain unresolved."
On Monday, the Hawthorne Police Department website went down and remained down all week (as of Friday it was still down). Earlier it was reported that the site simply went down because of people going to the site to complain about the incident. Now, a source disputes that version of events.
"We are not sure who is responsible, but there was a DDOS, or distributed denial of service, attack," a police source told the Daily Breeze on the condition of anonymity. "The city website has been down since Monday. The city is working with the Web host to get the site back up."
Anonymous didn't take credit, but denial-of-service attacks are often used by the group.
Watch the video from Anonymous (but use caution, as the end contains unedited footage of the extremely graphic shooting):
Reaction to the shooting has also come in the form of online petitions, which have sprung up at change.org (at last check, more than 88,000 signatures), causes.com (more than 77,000 signatures) and whitehouse.gov (more than 95,000 signatures). The petitions seek to get the officer or officers involved in the shooting fired and charged with animal cruelty.
The Hawthorne Police Department has launched an internal affairs investigation of the officers' actions.
We know tempers are running hot on this, but death threats have no place in seeking justice for Max.

This may be the end of the story for now, but this is not over.  These types of situations are not over.  There will be more.  This only stops with education.  Police have to be trained on the best way to deal with K-9's, not just to point and shoot.  R.I.P. Max, I am so sorry your young life was cut short and you had to die in such a horrific manner.
Posted by Bark & Clark