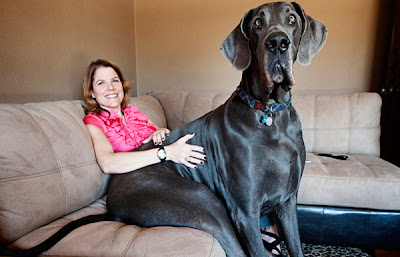 I have such a soft spot in my heart for Great Danes, but Zeus is a special one, he now holds the 2013 Guinness World Record for being the Tallest Dog.  The story from People.com is below.

Denise and Kevin Doorlag weren't looking for a purse pooch or some scrappy little Dachshund. No, they wanted a big dog.

So almost four years ago, they brought home a Great Dane named Zeus, then just a little ball of black fur.

As Zeus grew, the Doorlags's hopes did, too, one inch at a time. Now 3 feet, 8 inches tall – and 150 lbs. – the aptly named canine is officially the world's tallest dog, according to the Guinness World Records 2013 edition (which launches Sept. 13).

"It's kind of comical," Kevin Doorlag tells PEOPLE.com. "Everybody we see is like, 'Is that a horse? Is he part horse, part giraffe?'"

Zeus bests the previous record-holder by an inch (although that dog, fellow Great Dane Giant George, tipped the scale at 250 lbs.). But don't let his size fool you: he's more of a gentle giant than a big bully.

"He kind of acts like a small dog," Doorlag says. "He towers over [most dogs], but it's kind of funny. Even the smaller dogs will start sniffing, and if they bark, he'll run behind you. He's scared. He doesn't really realize how big he is."

Case in point: "He loves to sit on laps," Doorlag says. Besides frequent smooches for his owners, Zeus "loves human contact. He's a leaner." 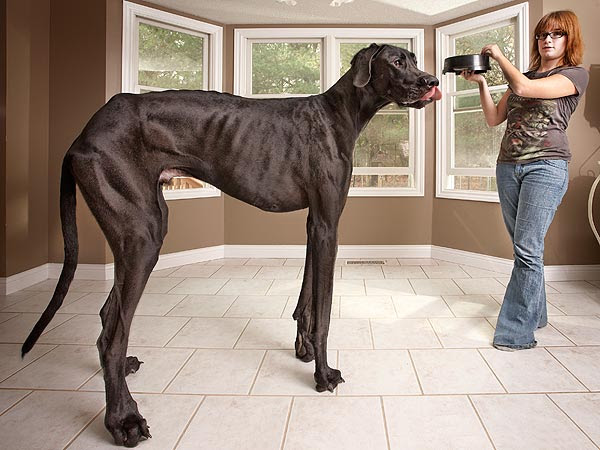 Nowhere is Zeus's sweet side more evident than when he volunteers at the local hospital in Kalamazoo, Mich., as a therapy dog.

"When we're doing pet therapy, he'll go up to the beds," Doorlag says. "It's nice with his size – patients don't have to bend over. He's actually at face level."

Back at home, Zeus keeps close company with the couple's children, 20-year-old Miranda and 17-year-old Nicholas, as well as their other dog, a German shepherd named Sagan.

The family keeps food available for him around the clock, and "there's no special diet," Doorlag says. When he feels like napping, he sleeps in the couple's bed, but when it's bedtime, Zeus retires to a queen-size futon mattress all for himself in another room.

And for all of the welcome attention Zeus has attracted, there's just one downside to owning the world's biggest dog.

"It's not bad," Doorlag says, "But if he stays on my lap for a while, he tends to get on the heavy side."

I love that Zeus is described by his owner as a "leaner".  One of my favorite traits of these huge dogs is their love to sit on your lap or lean on you.  Zeus sounds like a perfect delight, congratulations on being the tallest dog in the world!

Happy Friday everyone, be sure to do something special with your dog.
Posted by Bark & Clark