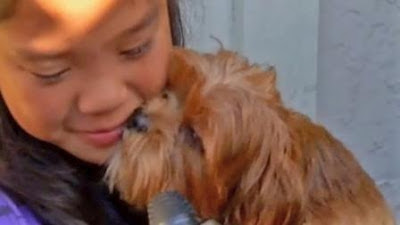 Could you imagine being a 10-year-old little girl that finally got your wish to have a puppy and then someone stole him away from you.  You would be heart broken for sure, but you would also want to move the sun and moon to bring your puppy home.  That is exactly the story of Marrisa Mabanag of San Jose, CA.

A Northern California girl was reunited with her 5-month-old dog after he was stolen from her during a burglary at her San Jose home.

Marrisa Mabanag, 10, couldn't stop cuddling 5-month old Meeko after she was reunited with him Thursday.

The girl pleaded for his safe return, even offering the contents of her piggy bank as a reward. In addition to Mabanag's savings, San Jose police, firefighters unions, and Councilman Ash Kalra chipped and gathered $6,000 in reward money which was given to Blanca Del Real.

The woman says she found the shih tzu-Yorkie mix wandering in a Los Banos Target store parking lot located 80 miles away from his owner.

"I want to say thank you to everybody who made this happen. I just can't believe he's in my arms right now," said Mabanag. "I thought he'd be gone forever. I'm just so happy he's here right now."

Del Real accepted the reward money from officials but told Marissa to keep the contents of her piggy bank.


This story is a great reminder of what we can do when we work as a community.  Thank you ABC 7 for this story and congratulations to Marrisa on getting your puppy back safely.
Posted by Bark & Clark