Dogs in the Workplace 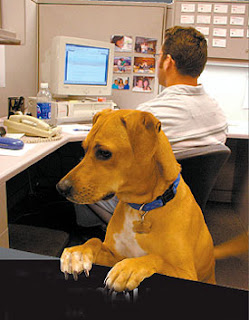 Having spent 10 years in Human Resources prior to becoming a dog trainer, I read just about every survey there was about employee happiness in the workplace.  It has not been a secret for quite a while that pets in the workplace reduces stress and increases productivity and overall happiness.  Yet this is a hard thing to convince many workplaces to take on as a policy,  usually due to liability or someone at the top not being a pet person.  Now, as a trainer, I find myself  still asked about this on a fairly consent basis.  Everything from "is it true?" to "would you come and talk to my boss?".

The article below from Petside addresses this topic quite well.  It is from one companies perspective, but it demonstrates the positives of a pet friendly workplace and the rules that should accompany such a policy.

The owners and employees of Indigo Wild, a company in Kansas City, Mo. that produces all natural soaps and lotions didn’t need a study to tell them that having pets in the workplace leads to more productivity and less stress.

Indigo Wild has been allowing all or some employees to bring their dogs to work since the company moved from Emily Voth’s kitchen, who founded the company in 1996.
The company, which has 13 full time and 20-30 part time employees at any given time, has at least 10 dogs in the factory each day.

“There’s just a lot of happiness and furriness,” says Leslie McGuire, marketing manager. “Every dog just has a routine and will go around to different people for treats; it’s a lot of fun.”

That’s basically what a study found that was conducted by Virginia Commonwealth University and released last March.

The study was conducted at Replacements Ltd., a retail business in Greensboro, N.C. The company has 450 employees and there are between 20-30 dogs at the business with employees each day.

The study was conducted over a period of a week, using saliva samples and surveys of people who brought their dogs to work, people who did not and people who didn’t have pets at all.

Stress hormone levels tested through saliva samples showed that all three groups of employees had the same at the beginning of the work day, but rose for those employees who didn’t have their dogs at work and those who have no pets at all. Employees who brought their dogs to work with them showed a decrease in stress hormones throughout the day.
The study also showed other less measurable positive influences such as employee interaction with each other and each other’s dogs.

McGuire says that Indigo Wild has never completed formal surveys on employee satisfaction and stress levels from being able to bring their dogs to work, but says that the company is an overall pet-friendly place and everyone likes the atmosphere.

“You would think there would be dog fights, but there aren’t,” says McGuire. “We have a dog run outside of the building and many of the dogs really like to play together.”

As for McGuire, she brings her five-year-old pug, Daisy, to work with her each day. McGuire has worked for the company for nearly three years and says when she applied, she wrote her letter of introduction in Daisy’s point of view and attached a photo of Daisy to the letter and resume.

“I knew it was a place where you could bring your dog to work and that was definitely an incentive for me to apply,” says McGuire. “I think Daisy’s letter and photo got me noticed as the first thing Emily said to me when she called me back is that I have a cute Pug.”

Indigo Wild has a total dog culture; it not only allows pets in the workplace, they produce Y.U.M. (Your Untidy Mutt), a line of dog soaps that contain essential oils, a spray to keep pet beds fresh and a candle to help eliminate pet odors from the home.

The company is also a supporter of the Kansas City Sheltie Rescue, donating a $1 of the sale of each bar of  Y.U.M.


What do you think?  Should pets be allowed in the workplace?  What are the guidelines?  Do you get to have your pet at work?  Give us a bark!
Posted by Bark & Clark