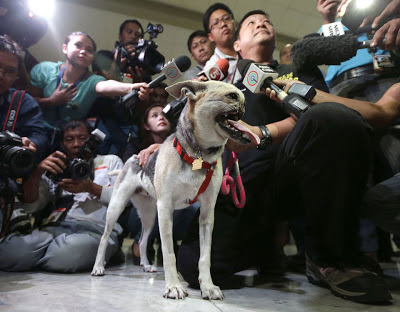 The BBC covered the homecoming of our favorite hero dog Kabang.  I couldn't help but shed a tear or six as I read the story and remembered her journey.  The thought of what a true hero this little dog is for saving her human "sisters" and then the journey to simply recover has been long and should have been traumatic, but I have never read about any fear, distress or terror.  This dog is so brave, so trusting and so absolutely remarkable!  Below is the story of her reuniting with her owners and how the community honored her. 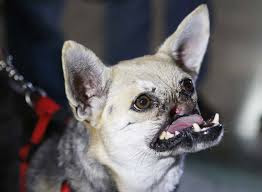 A dog that lost half her face saving two girls from an oncoming motorcycle has returned to the Philippines after eight months of treatment in the US.

The mixed-breed dog, Kabang, lost her snout and upper jaw in the incident in December 2011.

Kabang attracted worldwide support because of her injuries, with donations from the Philippines and abroad covering her $27,000 treatment costs.

A parade is planned in Kabang's honour in Zamboanga City on Sunday. 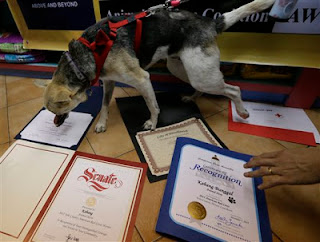 The hero dog jumped into the path of a motorcycle, stopping it from hitting her owner's daughter and niece in the southern city two years ago.

The accident left a gaping hole in the two-year old dog's face.

Kabang's heroic tale prompted an outpouring of sympathy, with fundraising campaigns set up on Facebook and Twitter.

Veterinary surgeon Anton Lim, who accompanied the dog to the US, said they received donations from 45 countries, covering the full cost of treatment.

"This is the first time in the history of the Philippines that we've seen such support for a dog," said Ed Unson, another Filipino vet and one of Kabang's handlers.

Doctors at the University of California operated on Kabang's wounds, and treated her for a tumour and heartworm. 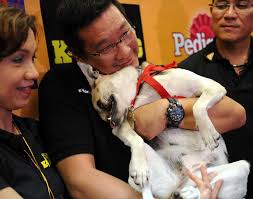 While they could not reconstruct the dog's jaw or snout, they took skin grafts from her cheeks, neck and forehead to cover up sensitive areas exposed on her face, University of California Professor Frank Verstraete explained.

Despite the disfigurement, Kabang can still chew her food using her two remaining molars, and smell well enough to recognise her owner and handlers, Mr Lim told reporters on Saturday.

The dog was greeted by a crowd of well-wishers at Manila airport and later reunited with her owner, Rudy Bunggal, in Zamboanga. 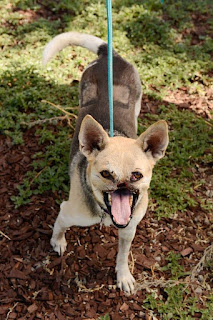 Kabang, we wish you well!  Enjoy your family and enjoy your modest but very rich life.  You are an amazing dog that fill us all with hope and inspiration that odds can be beaten.