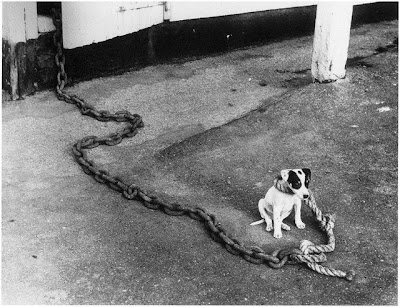 Dogster posted an amazing blog yesterday about tethering dogs.  First they brought us up to date with what is happening around the country with the laws that should be protecting our dogs and then told us how we can help stop it.  I am very passionate about this, it is really a cruel thing to do to a dog.  People will justify it in many ways, but there is no excuse, dogs should not be put on a chain and left.  What kind of life is that, it breaks my heart.  It literally is telling your dog that they are not wanted and are bad dogs... that is message.  Horrible!
I normally give you link to go check out, but this is too important, I am going to re-post the entire Dogster blog below.  I hope you all feel as I do and get involved to stop this and if you see it happening, please report it, the owners should have to face the consequences of their actions.
"

Mutts comic artist Patrick McDonnell uses Guard Dog to help draw awareness to the cruelty of tethering. Click on comic to get to his site.
A judge yesterday sentenced a North Carolina woman to a whopping three days in jail after her tethered dog was found dead in her yard. She’ll also be banned from owning dogs, although once she’s beyond Forsyth County lines, there’s probably not much that can be done if she decides to get another lucky dog.
The county is examining a law banning tethering, according to WXII12. It’s not alone. On the same day the North Carolina woman was convicted of animal cruelty, the Charlotte (Virginia) City Council enacted legislation that tightens the leash on people who tether, but doesn’t outright ban it. A Charlotte Observer article says the new law prohibits tethering dogs under four months old, and forbids the use of heavy chains. It also calls for some technical “improvements,” like having swivels on both ends of the tether, and requiring tethers to be at least 10 feet long and allow reasonable movement without the possibility of entanglement. (How is that possible?)
A few large cities have gone several steps further, and have outlawed tethering. Denver, Austin, and Fort Worth are among the cities who won’t tolerate dogs being chained or tied. Organizations against tethering are spreading the word about its cruelty, helping pass legislation improving tethering conditions or banning it all together, educating people about why it’s inhumane, and helping people come up with solutions. Some heartbreaking words from the site of Unchain Your Dog, a very active national group:


"Dogs are pack animals. In the wild, canines live, eat, and sleep with their family. In the absence of dogs, humans become their “pack.” A chained dog feels rejected and doesn’t understand why.
Imagine being chained to a tree year after year. You watch the door hoping someone will come play. No one ever does. You long to run, but you can only pace. You shiver in winter and pant in summer. Eventually, you stop barking. You have given up hope.
We have many forms of entertainment: movies, music, friends. Your dog only has YOU. If you can’t give a dog a good life, should you have one?
It is up to caring people like you to improve the lives of chained dogs. Some think, “It’s none of my business.” But it is the business of compassionate people to speak up when living creatures are treated like objects. You will feel good about yourself for helping a chained dog!"

There are plenty of ways to help stop this cruelty. Volunteers with the Coalition to Unchain Dogs, based in North Carolina and with chapters in Washington, D.C., and Atlanta, Georgia, have been building free fences for people with tethered dogs since 2007. To date, they’ve freed more than 500 dogs from living in torment at the end of a chain. Here’s how they describe the effects of their deeds:

Building free fences is a very effective and gratifying way to help large numbers of chained dogs. We regularly witness dogs who are depressed and stressed on their chains become relaxed and playful when they are released into their newly fenced yards. Relationships between the dogs and their owners are enhanced once they have a space in which to enjoy each other’s company. Due in large part to the immense satisfaction that comes from such tangible results, we have grown from a handful of volunteers to well over 100 volunteers who regularly contribute time doing everything it takes to get the chained dogs sterilized and off of their chains.

Want to help but don’t have one of these groups in your vicinity? No problem. Unchain Your Dog offers a list of 20 ways you can help a tethered dog. Some are designed for owners of chained dogs. Others, for dog lovers who want to make a difference. Tip #20, with its various sub tips, is the most appropriate for readers of  the Dog Blog. It discusses everything from helping pass anti-tethering laws, to educating people about the dangers and cruelty of chaining, to info on building fences.
I have personal experience with dog chaining. Several years ago, in doing research for one of my doggy guide books, I came across a beautiful, big, black-and-white dog in the middle of the road in rural Northern California. I stopped, got out of my car, and approached him. He backed away, but when he saw I was trying to be friends, he came toward me, wagging his little stump of a tail. It was then that I saw what was around his neck: Not a collar, but a big thick chain that wrapped around his neck and extended about three feet, and was dragging on the ground. It looked like he had torn it loose, or maybe someone had cut him loose.
I put him in my car and asked around the neighborhood if anyone knew who the dog belonged to. I wasn’t about to give the dog back but I felt obliged to check out the situation. No one would say anything, but I finally ran into a woman who told me, “Yeah, I know whose he is, and I’m gonna do that dog a favor and not tell you. Just get him out of here.” I did. I called the local humane society just in case there was a terrible mistake and the dog had loving owners who were looking for him, but no one claimed him. (They had agreed to work with me if the people who claimed him did not have a decent setup for him, but fortunately I never had to deal with that.)
Our house already had enough dogs at the time, but I was able to find him one of the most amazing, loving homes in the Bay Area. The couple who adopted Bill live in a huge house in the San Francisco, and have 200 acres of property in the Sierra Nevadas. They adored him, and made his remaining eight years heaven on earth. I never regretted taking the dog away from the chains that bound him.
There are tens of thousands of Bills out there who need your help. Please let us know how you feel about the tethering issue, and if you’ve ever done anything about it, or plan to."
Thank you Dogster!
To view the original blog, bark on the link:  Bark!
Posted by Bark & Clark