Cesar Millan To Be Given An Award 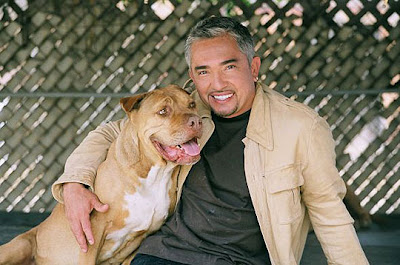 North Shore Animal League is a well known and well respected rescue that does great work for the animals they rescue.  I certainly am a fan of the work they do.  But, when I read they are honoring Cesar Millan at their annual DogCatemy Rescue Awards Dinner on Thursday, December 8th, I have to admit I am a little put off by it.

Before I can judge, I do have to be fair to the Animal League, Cesar Millan has been a supporter of theirs for a while and lends his celebrity status to promote their cause as well as supports them in a financial capacity.  Here is what was said about the award and what they are honoring:


The Animal League will bestow the inaugural "Cesar Millan Award for Excellence in Mutt-i-grees Education" to Cesar Millan, internationally renowned dog rehabilitation expert and star of Nat Geo WILD's 'The Dog Whisperer with Cesar Millan'.  The award recognizes the impact Cesar Millan is having in the humane field and honours him for his many contributions, including the founding of the Millan Foundation.   This Foundation funds the Mutt-i-grees Curriculum, a collaboration between North Shore Animal League America and Yale University's School of the 21st Century, promoting the development of calm, confident and caring children who can make a difference in the lives of people and animals.

"Cesar Millan has truly set himself apart as a leader and adoption advocate," said John Stevenson, President of North Shore Animal League America.  He added, "His generosity and financial support, as well as his commitment and extensive involvement in the Mutt-i-grees Curriculum are raising the standard for humane education.  Cesar's dedication is evident in contributing to new trends and lessons for people and pets to ensure a happy, loving life together."

Again, to be fair to the Animal League, I see why they would honor Millan.  I just don't think he has a very humane way of training.  However, I can't deny that he has spread the message of adoption to the mass public.  But this is where I get a little uncomfortable.  Cesar Millan spreads a lot of messages to the mass public.  Not everyone should adopt.  Not everyone should take their dog to a dog park.  Not all dogs should be alpha rolled.  My biggest problem is that he presents his style of training (which is heavily edited on his show) as something anyone can do.  But the fact is, if your dog is not socialized and you have no idea what you are doing, taking your dog to a dog park is likely to result is a disaster, not a productive training session.

No matter how I feel about Mr. Millan, the fact that his name has helped a rescue be a little more successful is something to celebrate.  I am happy that such a great rescue has the opportunity to shine a little brighter, no matter what star it is getting the light from.

What do you think?  Your thoughts and comments are always welcome.

For the whole story, bark on the link:  Bark!
Posted by Bark & Clark