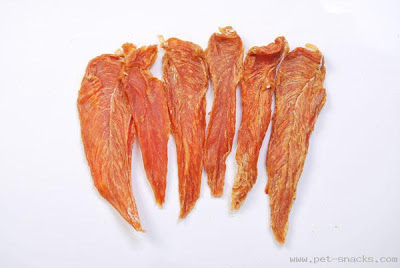 As we are doing our holiday shopping for all the dogs in our lives, I thought I would post another warning about Chicken Jerky Treats.  As I know you all heard just before Thanksgiving the FDA put out a warning about any Chicken Jerky Treats made in China.  They are making dogs sick and the cause is unknown.  There is no specific brand, the only common link is the product is being manufactured in China.

Below is a letter from a specialist that was treating a dog with an unknown illness.  It was suspected that the Chicken is what caused this illness.

In a phone discussion with the owners . . . they reported that their other small breed dogs at home were showing similar clinical signs . . . [at the time the Poodle was discharged from the hospital, the] owners brought with them the chicken jerky treats that they had been feeding prior to onset of [the Poodle's] illness.

The treats are manufactured in China and are supposed to be made up of 100% chicken breast. Last year, I saw a number of small breed dogs that ate similar treats (though a different brand), that presented with the same clinical signs of vomiting and prolonged [refusal to eat] after the vomiting resolved . . . A number of veterinarians at other hospitals had seen similar cases as well, presumed to have resulted from ingestion of a variety of brands of chicken jerky treats manufactured in China.

Investigation of the products was not successful in identifying the offending substance and, unfortunately, removal of theses products from the market was not made mandatory.

It is a shame that no formal recall could be issued.  I hate to think that the treats we are feeding our dogs could cause this much harm.  The best thing for you to do is to pay attention to where your treats are manufactured.  It is always clearly marked on the back of the packaging.  Please do not just take the store clerk's word for it, look for yourself.  A friend was in a store just after this warning was put out and mentioned to the store worker that she was surprised to see some chicken jerky treats still on the shelf as they are manufactured in China.  The store worker argued they were not, it was not until my friend grabbed the bag and showed the worker that she then stood corrected.  She admitted she was surprised because of the brand she assumed they were manufactured somewhere else.


For more information on this warning, bark on the link:  Bark!
Posted by Bark & Clark