For The Love Of Cats! 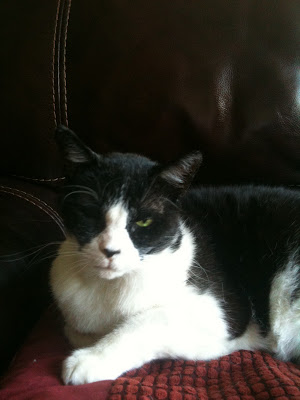 I know this is suppose to be a dog and Downtown blog, but I have to talk about my cat today.  Growing up, I was always more of a dog person, we had cats that lived in the barn, but not house cats.  I always played with them and loved them, but it is different when they don't live in the house with you.  It wasn't until later when my sister had a cat of her own when she had her first apartment did I really start to love cats.  Then I moved into an apartment with my best friend in L.A. and he had a cat that changed everything.  When she passed, we both started to desire a cat of our own.  So that is when I found my sweet cat, Cowboy.

He was 16lbs, 8 years old and the shelter all but gave him to me.  They were so excited someone wanted an older cat.  He had two more weeks before they were going to euthanize him.  I felt like the luckiest lady in L.A. and I am pretty sure he felt lucky as well.

Cowboy was the name he had at the shelter and it fit him so I never changed it.  I have no idea about his past, the people that turned him in had only had him 6 months.  What I could clearly see is that he was missing several claws and teeth and the teeth he did have were in pretty bad shape.  One eye looked like it was winking and had fluid draining from it and he was sneezing a lot.

I took him to a vet and they gave him a clean bill of health for the most part.  A cold, an eye ulcer and a suggested teeth cleaning and I was suppose to be set.  Well, I didn't do the teeth cleaning right away, but everything else seemed good.  A year later I tried to get his teeth cleaned but they refused due to the condition of some of his teeth.  I then ended up taking him to an emergency room for a tooth falling out and they wanted to extract all of them.

Fast forward to present time, I took Cowboy to my new fantastic vet, Dr. O'Dwyer and learned some very interesting things.  Dr. O'Dwyer recommended two (rather than all) of his teeth be extracted, she told me he may have a form of feline herpes which is why he seems to have cold after cold after cold.  Also, his eye could be an ulcer or part of the herpes.  I got the right medicine and then scheduled his surgery.

Last Wednesday he had three teeth extracted, two canines and one other that they found was very bad once inside his mouth.  I was amazed at how fast the procedure was and how well he did.  By the time we got home that evening, he was ready to eat and was jumping around like normal.  Now, almost a week later, you would never know that this even happened.  He is like a new cat!

I hate to think about how uncomfortable he must have been all this time, he is obviously very happy now.  I can't thank Dr. O'Dwyer enough for her and her staff and how good they were to my Cowboy.  I was so worried something would happen while he was under or he just wouldn't wake up.  It felt like a million pounds was lifted off my chest once I got the call he was fine.

I didn't know it was possible for him to have this extra spunk!  As I look at how he and my dog are now running and playing with each other, I am happy to see what looks to me to be a new cat.  He is still my sweet guy, but with a little more sass!
Posted by Bark & Clark