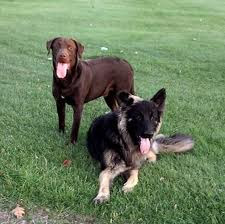 I heard this disgusting and very disturbing story on the news this morning.  In South Los Angeles two severed dog heads were found in a dumpster behind a CVS.  There are no suspects thus far but the case is being investigated.  Below is the story in full according to ABC7.

The severed heads of two large dogs were found in a trash bin in South Los Angeles.


The gruesome discovery was made on the 5800 block of Menlo Avenue on Tuesday at about 10:35 p.m. The dumpster was located near the back of a CVS Pharmacy on South Vermont and West Slauson avenues.

Investigators with the LAPD Animal Cruelty Task Force said it was apparent that the dogs' heads had been clearly severed from their bodies with a sharp object. The bodies of the dogs were not found.

Police said it's unclear whether the incident involved dog fighting, and if the dogs had been dead before their heads were removed. Upon investigation, authorities believe the perpetrator cut the dogs' heads at a different location before placing them inside the dumpster.

Authorities say the dogs appeared to have been full grown. One of the dogs was a chocolate Labrador-Retriever mix and the other was a tan Shepherd mix.
Investigators are reviewing evidence including surrounding surveillance footage to catch the suspect or suspects responsible.

"We're always looking for information because if somebody's capable of killing two family dogs like this and dismembering their bodies and leaving them in a dumpster, we don't know what they're capable of and we want to make sure we find out who did this and bring them to justice," said LAPD Cmdr. Andrew Smith.

To say this is disturbing doesn't really cover it!  I am sickened at the thought that someone would do this!  My fingers are crossed that the surveillance footage will give police some answers and bring justice for these two deceased dogs.

If anyone reading this blog has any information, please reach out to either of the numbers above.
Posted by Bark & Clark