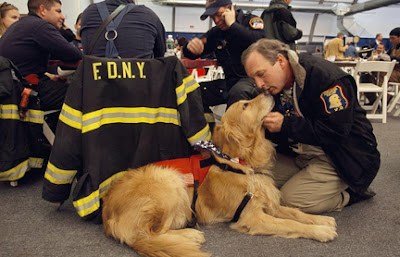 It is hard to believe that this Sunday marks the 10th anniversary of the 9/11 tragedy.  Last year I did a tribute to the dogs of 9/11 and this year I want to share with you a tribute that Yahoo News did.  It is both heart warming and astonishing to see what these dogs did.  As you go through the pictures you are reminded that they worked so hard and long many only stopped due to dehydration or for a mandatory rest (usually with their handler).  I always stand in amazement of service dogs, but search and rescue are a special sort with very special hearts.
Below are a few of the pictures and captions from the Yahoo News slide show, but I encourage you to click on the link at the end to see the whole thing.  It is truly amazing. 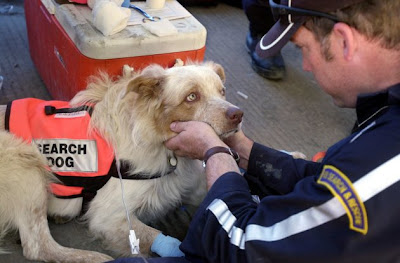 Erick Robertson, of Oakhurst, CA, pets Porkchop, a one-year-old search and rescue dog as he receives a dehydration intravenous treatment, Wednesday, September 19, 2001, at the Society for the Prevention of Cruelty to Animals mobile clinic just outside ground zero in New York.  Robertson and Porkchop have been working at the World Trade Center attack site since Sunday. (AP Photo/Suzanne Plunkett) 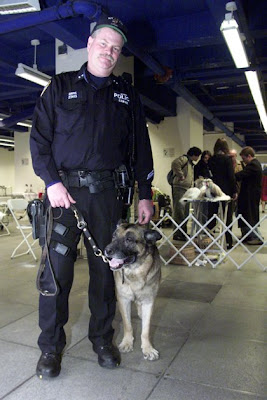 New York Police K-9 officer Peter Davis and his Search and Rescue dog, Apollo, attend the New York Specialty Dog Show February 9, 2002 in New York City.  Officer Davis and Apollo were the first Search and Rescue dog crew on site after the collapse of the World Trade Center September 11, 2001 in New York.  Officer Davis and Apollo received the Langden Sarter award from the American Kenel Club (AKC).  A check for $400,000 was given from the AKC to the Federal Emergency Mangement Agency (FEMA) for studies on the health affects of exposure to the site on dogs like Apollo.  (Photo by George Best/Getty Images) 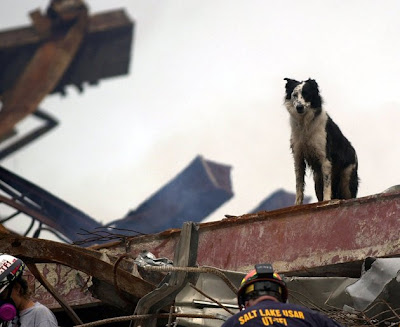 Cowboy, a black-and-white Border Collie searches for victims in the rubble of the New York's World Trade Center for the Federal Emergency Management Agency, in this September 21, 2001 file photo.  Scientists have spent years studying the health of search and rescue dogs that nosed through the debris at ground zero, and to their surprise, they have found no sign of major illness in the animals.  (AP Photo/Alan Diaz, File) 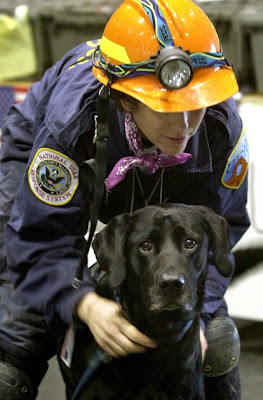 Mary Flood leashes her black Labrador retriever search and rescue dog, Jake, near the World Trade Center in New York in this September 22, 2001 file photo.  Jake, who helped search the rubble following the September 11 attacks and later worked in Mississippi following Hurricane Katrina, died Wednesday, July 25, 2007.  The results of an autopsy on his cancer-riddled body are part of a University of Pennsylvania medical study of September 11th search-and-rescue dogs. (AP Photo/Alan Diaz, File) 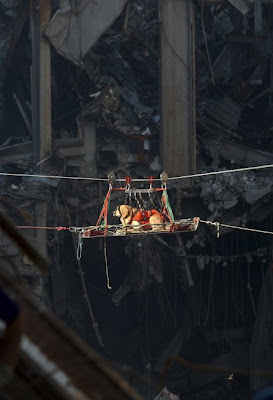 A rescue dog is transported out of the debris of the World Trade Center, September 15, 2001.  (REUTERS/HO/U.S. Navy Photo by Journalist 1st Class Preston Keres)
Please view this entire slide show, it only takes a moment.  The images of these dogs and handlers are breathtaking and heartbreaking all at the same time.  While we take this moment to remember all those that were taken from us or gave their lives in an effort to save others, please also remember the K-9's that helped us recover in so many different ways.
To view the Yahoo New Slide Show, bark on the link:  Bark!
Posted by Bark & Clark