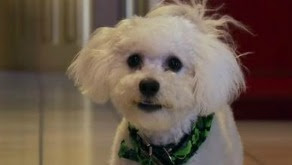 Since the pilot aired last year, I have heard a lot about Animal Planets' new series Bad Dog!.  I decided to record it and have a look.  Well, I must say, I am not impressed nor entertained.
I watched the show last night, expecting to be at the very least amused.  To be honest, there were a couple that achieved that for me.  But the majority of the show was (of course) highlighting dogs with really awful behavior.  That was to be expected, but to make light of a lot of these cases was a real turn off to me.  Some of these dogs needed help!  Either they were suffering from separation anxiety and being put in danger for the sake of capturing this "funny" behavior on tape or they were running the household with no rules or guidelines whatsoever.
As a trainer, I couldn't help by diagnose each dog and come up with make believe solutions.  At the same time I had this awful feeling that the general public is watching this and finding this bad behavior funny.  I really hope this doesn't encourage any more people to just allow their pets to behave this way and think it is "cute" or "amusing". It is not!  It is one thing for an owner to test a dog and learn that they really can't be trusted home alone out of the crate, what owner doesn't do that?  But it is another to allow your dog to wake up the entire house whenever they want, potty in the house at anytime and to be a complete nuisance on the humans living in the home.
It is my strong belief as a trainer that dogs need structure to live a happy life.  I don't believe that dogs that live with no rules are really happy, I think it is a lot of weight for them to carry.  We as their human companions should take care of them, structure their life for them, and let them worry about being a good companion to us.  That is it.
For training with Bark & Clark, Bark on the link:  Bark!
Posted by Bark & Clark