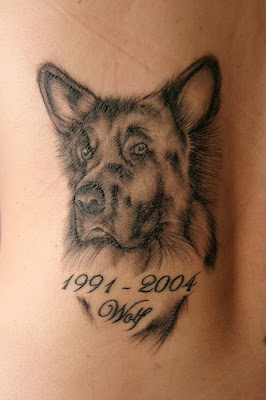 Petside.com published an article about the "new" trend to tattoo the name of or portrait of your pet to memorialize them forever.  It is something that I have seen time and time again over the years and honestly have given serious thought to doing it myself, especially after losing Robert.  But, for me, I never could decide what I would want or where it would go.  I don't know that this is really a "new" fad so much as we are now paying attention to it because of people getting them, such as movie stars, singers, sports stars, etc.
No matter if this is new or not, it is an interesting way to pay tribute to our four legged friends.  For your reading pleasure, below is the article in it's entirety, I hope you will participate and send in your photos of your tattoos to Petside, if you have any to share.

In past years, tattoos were seen on the arms of military men, hardcore bikers and regretful young men who were dared by their friends during an evening of binge drinking. Now considered hip, body art adorns the arms, legs, heads and torsos of our favorite actors, musicians and sports figures with inspirational words and characters, tribal representations, religious symbols, floral designs, fantasy figures, geometric patterns, portraits of family, friends and others, including animals.

According to tattoo artist Justin Weatherholtz of the famed Kings Avenue shops of Long Island and Manhattan, “people get tattoos for a variety of reasons including honoring a loved one, even an animal.” Over the years, Weatherholtz had captured the essence of 30 plus four-legged family members from photographs given to him by clients. He notes that they “primarily wanted to portray their dogs’ face/head or full bodies to memorialize their late pet.”

In January 2007, Alecia Moore, otherwise known as “Pink”, lost her English Bulldog, Elvis - a gift from her dear friend, Lisa Marie Presley, daughter or Elvis Presley. It was reported that the dog who liked to swim was left in the backyard of Moore’s Los Angeles home while she ran an errand. Upon her return, she found him floating in the pool. The devastated songstress inked her arm with a portrait of her beloved dog. Underneath his portrait were written the words, “A time to weep. A time to mourn. Sleep in peace."
But this is not the singer’s first tattoo to commemorate a pet. Also on Pink’s lower left arm are the words, "Sir Corky Moore 2003.” Corky was the childhood dog of the singer who passed away in 2003. Out respect, her family called  him “Sir.” Later that the year, she  had his name and date of his death inked on her arm.

“People conduct all types of rituals to commemorate their lost pets,” says New Jersey grief counselor Claire Caines, MSW, LCSW of the Caines Center For Psychotherapy. She believes that having a tattoo is a very visible way to keep a memory alive.
“I suspect we will see more of these in years to come.”

Most recently, Jennifer Aniston told James Lipton, the host of Inside the Actor’s Studio, that she got her first tattoo on the inside of her right foot that reads, “Norman.”
In May 2011, Norman, the beloved 15-year-old Welsh Corgi-terrier mix of the actress, passed away. Over the years, in many celebrity-focused magazines, we have seen the dog walking along side his mistress on the beaches in Malibu where she lived or on the streets of movie location cities.

Whether you are interested in paying tribute to a deceased or living pet with a portrait or his or her name inked on your body like Pink or Aniston, you might want to check out these pawsome tattoos before you get started.

And you if do a get a tat of your beloved pet, send us a picture here at www.petside.com.