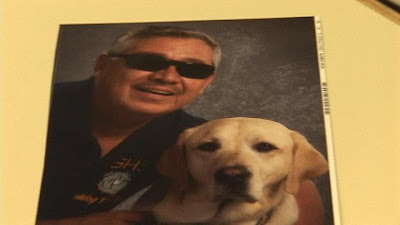 I was watching the 11 o'clock news last night when I saw this story out of Sacramento where a guide dog was attacked by two Rottweilers and I new I had to blog about it this morning.  This makes me so angry on one hand but it also completely warms my heart on another.
On Saturday morning Frank Lopez, a teacher who is legally blind, took his guide dog Nolan for a walk.  During this normal walk Lopez says he heard the dogs approach behind them, "I could hear the nails from his paws running on the concrete and then I heard Nolan whimper."  Lopez then tried to get in between the Nolan and the first Rottweiler, but then the second dog came into the attack.  It wasn't until a bystander and the dog's owner came out to intervene that the attack on Nolan ended.

"I could feel he was bleeding really badly," said Lopez, who was also injured when he fell during the attack.

Nolan was taken to the El Camino Animal Hospital, where doctors immediately operated on his ears - a surgery that had an upfront cost of $1,400. In the surgery room, the veterinarian said his injuries were not life threatening, but it was unclear if Nolan could resume work immediately as a guide dog.

"He didn't leave me. He didn't even try to run away during the attack," said Lopez. "He just stayed by my side the whole time and didn't even think about protecting himself."
Nolan is a 3 year-old yellow lab from Guide Dogs for the Blind in San Rafael. Lopez has had Nolan for two years.

"I had to use my cane for the first time in two years," said Lopez. "I'm really fortunate to have Nolan. I depend on him for a lot of things. I kinda feel naked without him."

I am left feeling completely appalled at the owner of the Rottweilers!  You know if your dog is at that level of aggression with other dogs.  To be willing to track down a dog and attack them with no reason is awful.  Let me be clear, I am NOT saying all Rottweilers are this way, this has nothing to do with the breed, everything to do with what the specific dogs did.  But even with that, I don't blame the dogs fully, I blame the owners.  Those dogs should not have been allowed to get to the street and run freely.  I do understand dogs escape now and then, but if your dogs are aggressive like that, you can't take that chance and it is YOUR responsibility as an owner to keep your dogs from harming other dogs, humans or themselves.
On the other hand, I am left feeling completely in awe of Nolan that stood by his owner and continued to do his job.  I wish Nolan well and hope he is back to work soon.
For the complete story, bark on the link:  Bark!
Posted by Bark & Clark