The Power Of A Dog's Nose 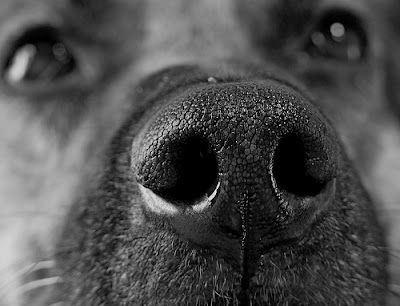 K9 Magazine newsletter had a great warm and fuzzy article this morning.  It is a story of how a family dog lead his owner to a former family house.  The crazy part is that the family had not lived there for 70 years!  I think it is great way to kick off the month of February!

A Massachusetts man recently discovered a forgotten part of his family's past when, during a walk in their new neighborhood, his dog led him to his father's childhood home from 70 years previous – a house that not even his father remembered, as he was only two when he lived there. They've turned this story, along with other dog tales, into a book called Follow the Dog Home: How a Simple Walk Unleashed an Incredible Family Journey. The hardcover release is February 1, 2012. We all know February is the month for love, and who doesn't love dogs? Corny? Yes. But the storyline isn't.

After moving to Wellesley, Massachusetts for an anchor job with a major television sports network, Kevin began taking his German Shepherd, Beverly, for walks in the surrounding neighborhoods. They developed a route that included historic Atwood Street. Beverly kept veering toward one house in particular that had also caught Kevin's eye previously, thinking it looked familiar but not knowing the reason.

After talking to a close family relative who had also once lived in Wellesley, Kevin was shocked to discover that the memorable house had once been a childhood home to his father, Bob Walsh, before WWII. After digging through old family photos that had been tucked away for years, Kevin uncovered a picture of his father as a toddler with his family on the house's front porch, complete with their first family dog, Dee Dee.

Kevin's father had been writing short stories about all of their family dogs through the years, but never knew about the photo. Its discovery was the pivotal moment that offered proof that the Walsh family's journey with dogs had come back to the exact place where it started.

Follow the Dog Home, which Publishers Weekly called "quaint and most charming," was written by Kevin Walsh, his father Bob, and his daughter Samantha. Bob lives in Ledyard, Connecticut, with his wife, Mary McGrattan. He is retired from a forty-year career in the pharmaceutical industry and now spends his days fishing, building fly rods, feeding the homeless, and traveling. Regularly by Bob's side is his ever-faithful dog, Annie the Corgi.

Samantha, who is only ten, loves taking care of her family's German Shepherd, Beverly, and dancing in ballet performances. She hopes to one day become a veterinarian.

Kevin lives in Wellesley, Massachusetts, with his wife, Jean, and daughters Samantha and Amanda. He is a seasoned sports and news broadcaster with Comcast SportsNet New England and New England Cable News. Kevin's first book, The Marrow in Me, details his courageous journey as a bone marrow donor.

This is a great story that shows the love between owners and their dogs!

Show the love you have for your dog and sign up for the Love Your Dog Pooch Parade today!
To RSVP, bark on the link:  BARK!
Posted by Bark & Clark