Actor Kills Himself After Forced Euthanasia of his Pit Bull 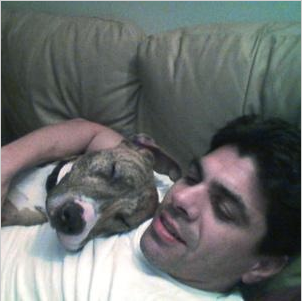 Dogster brought us a story this morning that is tragic and heart breaking!  I guess the saying desperate times lead to desperate measures rings true here.  But it didn't have to be this way.  I see it as a discrimination case that included bullying and harassment  sent a broke man over the edge.

Like Dogster, I hate to bring you such a sad story on Monday morning, but it is one that needs to be told.  These bans are getting out of control and hurting innocent dogs and people.  This is no more than discrimination of a breed.  It needs to stop before more dogs and people get hurt.

Here is the story:


Struggling soap-opera actor Nick Santino used to say that the pit bull mix he rescued actually rescued him. The actor had grown up in an orphanage and foster homes, but when he adopted his dog several years ago, they bonded deeply, perhaps more than he had with any of his temporary families. His dog, Rocco, was his family.


But both are now dead, and friends and neighbors are saying it’s because his Upper West Side building’s management had been harassing him for months because of Rocco. In 2010 the building passed strict dog regulations with a pit-bull ban. Rocco, the only pit bull in the building, was grandfathered in. But the harassment had apparently grown unbearable in recent months.

Among the difficulties, Rocco was no longer allowed to ride in the main elevators, and one condo neighbor complained the dog was a barker, even though other neighbors said it was not true. Management threatened Santino with a $250 fine.

“Everybody knows that he had been harassed by the building management,” said neighbor Lia Pettigrew, who works in the pet-care industry.

“People were complaining about his dog,” said neighbor Kevan Cleary, adjunct professor at Brooklyn Law School. “It was open season on him.”

On Tuesday, something inside him snapped, or more likely, broke under pressure. Santino took his healthy best friend out of the building one last time and had him euthanized.

But overcome with the horror of what he had done, Santino took an overdose of medication later that night – after tearfully giving the doorman and neighbors Rocco’s treat, rawhides and bed. It was a day after his 47th birthday.

His suicide note included this, according to a friend:
“Today I betrayed my best friend and put down my best friend. Rocco trusted me and I failed him. He didn’t deserve this.”

Rocco has been cremated, and Santino will be, too. Their friends will make sure their ashes will end up together forever.

This story is just so tragic, and I am sorry to bring it to you on a Monday morning. But it’s important to tell it. Maybe it will be a cautionary tales against this kind of discrimination. Yes, Santino was down on his luck, and there may have been more going on than we know about. Maybe he could have moved, but that’s not easy in NYC, especially with a pit bull. Through the grey haze of bullying and harassment, he could not see clearly. I hope someone has to answer for this. (Building management did not respond to inquiries by media.)

RIP, and rest together, Nick and Rocco.