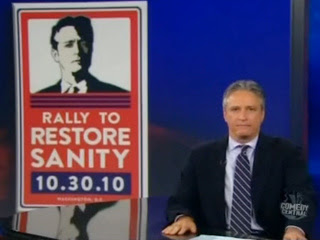 I guess I have been bitten by the political bug!  I'm talking about politics again, kind of.  More on point, I'm talking about the rally that Jon Stewart is putting on next Saturday, October 30th.  For those of you that watch Jon Stewart's show or have been following this story in the news, he has decided to put on the Rally to Restore Sanity.  He will be holding the rally at the National Mall in Washington D.C., but Los Angeles is getting involved too.  At the same time he is holding the rally in D.C., we will be participating here in L.A. in MacAurthur Park.  The time has not been set yet, so watch the papers or Downtown News.  The local event organizers Amy Lee and Ashley Wright initially asked Pershing Square to hold the event there, but they rejected the idea due to the preparation to set up the annual ice skating rink to be opened November 18th.  So, today it was announced that MacAurthur Park was willing to be the site host of the rally.
The Rally to Restore Sanity is Jon Stewart's retort to the conservatives or any group that are driving fear into the American public's heads.  Rather than try to explain it, here is a clip of Jon Stewart announcing the rally:

For more information on the Rally to Restore Sanity, bark on the link:  Bark!
Posted by Bark & Clark