What To Do For Halloween? 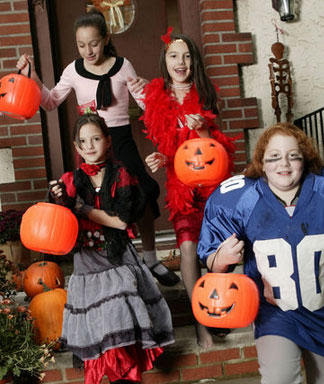 If you are in the boat I am in, you are still asking yourself "what will I do for Halloween?".  Well, maybe today I can help.  There are a lot of things happening in Downtown that should keep us entertained.  My problem is I really want something for Saturday night, but it seems that most places are doing their event on Sunday, which makes sense that is the actual date of Halloween.  But it's a Sunday!
Anyway, Los Angeles Downtown News put together a list of 11 events that are happening in our amazing city for Halloween.  Good luck in your hunt to find your perfect haunted event.
For the Kids: One of the biggest scary attractions in Downtown is also one of the newest: The Downtown Center Business Improvement District is bringing back, for the third installment, the Halloween Party for Downtown L.A. Kids at FIDM’s Grand Hope Park. The free festival takes place on, naturally, Sunday, Oct. 31, from 5-8 p.m. Expect hundreds of people to show up, with every kid in a costume, and many adults too. Just don’t be the wise guy/gal who dons a suit and says you’re going as a lobbyist. The party will include a bounce house, face painting, balloon-animal making and jugglers. The nearby Ralphs Fresh Fare will provide candy.

Fright Night: What’s scarier than a punch in the face? Golden Boy Oscar de la Hoya gets into the Halloween spirit on Thursday, Oct. 28, with a night of boxing and costumes at Club Nokia (it’s the crowd that will be donning outfits, BTW). The first 100 fans wearing costumes to the temporarily re-named Fright Night Club will get in for free to see unbeaten Gary Russell Jr. against Guadalupe De Leon. De la Hoya of course had a great career, but he did not go undefeated. Since Halloween is all about frights, you can scare the Golden Boy by dressing up as Felix Trinidad or Shane Mosley, who both pummeled him. Or scare everyone and go as Don King.

Scary Singles Mingle: What’s scarier than being solo on Halloween? Nothing! That’s the impetus behind the Weiland Brewery’s Halloween Costume Party and Singles Mixer, taking place in the brewery’s City National Plaza location on Thursday, Oct. 29, at 8 p.m. Entrance offers the opportunity to mingle and flirt with Downtown’s most eligible bachelors and bachelorettes, with many of them in costume. While there will be plenty of monsters, zombies and vampires in the house (in the bar?), they will all be doing some good, since a portion of the proceeds will go to the Los Angeles Mission, animal-aid group Karma Rescues and One Laptop Per Child, a nonprofit that provides computers to needy kids.

Scaredison: With an old-time feel, it’s easy to imagine ghosts or demons walking around The Edison. After all, the joint is a former boiler room. So on Oct. 31, don your party mask and prepare to be surrounded by costumed revelers at the bar’s All Hallows Eve. Tickets are $20 pre-sale for costumed guests and $25 at the door. If you’re a party pooper and come without a costume it’ll be $35 at the door. There will also be prizes for Best Original, Humorous or Ghoulish costume.

Dance to the Massacre: Last year’s event sold out, so don’t get left out at Vertigo’s Halloween Massacre. The queasily named Oct. 29 party will include a roster of all female DJs spinning ’80s, hip-hop, electro and dance tunes. There’s a midnight costume contest hosted by Rose and Natalie from Showtime’s “The Real L Word.” There are also drink specials. The party is for those 21 and older, and Vertigo’s is a small venue, so it’s likely to sell out again.

Classic Spooks: Saw and other films of that ilk are often frightening (and sometimes stupid). Yet all their blood, guts and body parts rely on what some consider cheap scare tactics. If you’re of that mindset, kick it really old school on Halloween when the Walt Disney Concert Hall screens the 1920 classic silent film Dr. Jekyll and Mr. Hyde. John Barrymore stars and there will be live accompaniment on the venue’s mammoth pipe organ, which will certainly add some ambience to the spooky story by Robert Louis Stevenson. The screening starts at 7:30 p.m. A word of advice: Don’t dress up as Jigsaw from Saw for this one. You’ll just look dumb.

Devilish Weekend: If one day of Halloween isn’t enough for you — and let’s be honest, with Halloween falling on a Sunday, it’s probably not — Suede Bar & Lounge is planning a weekend filled with devilish fun. On Saturday, Oct. 30, the club hosts a party with cash prizes for the scariest, sexiest and most original costumes. On Halloween itself, the bar in the Wilshire Grand hotel presents the Halloween Masquerade with DJ Yvonne Black.

Puppet Spirits: The annual Halloween Hoop-de-Do at the Bob Baker Marionette Theater is back this year. With the Purple People Eater, the Invisible Man and dancing skeletons, the show goes on through Oct. 31. Performances are at 10:30 a.m. Tuesday-Friday and 2:30 p.m. Saturday and Sunday. The theater itself is a historic landmark and is celebrating its 50th anniversary season. The Hoop-de-Do first premiered in 1963, so these puppets know what they’re doing when it comes to putting on a show. FYI: It’s for the elementary and pre-school set, so it’s not really scary.

VaVoom Goes the Room: One of Downtown’s most entertaining Halloween traditions returns this year. Even better, it takes place early, so you can watch people in chicken outfits fly through the air, and see others take off their clothes, and still have plenty of time until Halloween. On Wednesday-Thursday, Oct. 27-28, Lucha VaVoom returns to the Mayan Theatre. The 8 p.m. events famously pair masked Mexican wrestling — acts include a guy calling himself Little Chicken — and throwback burlesque dancers. Comedians provide a running commentary.

Bring Out Your Dead: It’s not really a Halloween celebration, but there are plenty of skeletons, masks and candy at the annual Dia de los Muertos festivities at El Pueblo de Los Angeles Historical Monument. Organized by the Olvera Street merchants, the event runs from Oct. 25-Nov. 2. During the week there will be workshops where kids can make masks and necklaces and learn about the Mexican holiday, which celebrates the memory of those who have passed away. On Oct. 30-31, from noon-6 p.m., there will be street theater, face painting, mariachi music, Aztec dancers and puppet shows.

Frightening Sounds: If seven hours of techno doesn’t frighten you, then follow the beats to Exchange L.A. The rave Sounds From the Deep will take place in the newly opened 25,000-square-foot venue Oct. 31 from 8 p.m.-3 a.m. The party will feature seven DJs spinning tunes along with a light show. Tickets are $15 before 11 p.m. and $20 thereafter.

At 618 S. Spring St., tickets at wanttickets.com.
To view a list of more to do on Halloween, bark on the link:  Bark!
Posted by Bark & Clark