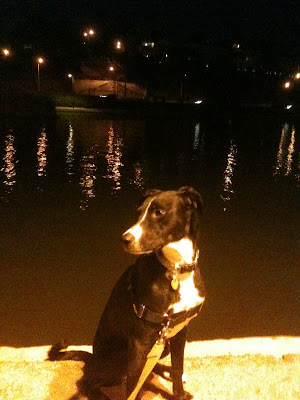 Sweet Neville has been very busy and working very hard on getting better.  Each day that passes he comes out of his shell little by little.  His walking on a loose leash is getting much better, he really only pulls when there is someone right behind him or he will swing out if a cart or rolling trash can passes by.  These are his two biggest issues, so I am very pleased with this progress.  He is able to sit and let the people or things on wheels pass, which again is great progress.
His bonding with Adam has highs and lows, there are days he really doesn't want to go to him when he calls or he won't want to go on a walk with Adam without me.  He does always do it in the end, but there is a hesitance that I am trying to get him over.  He is able to eat from Adam's hand, I have removed myself from this pleasure to help the bonding process between them.  Last night they started their class together, this picture below is of the two of them about to head out the door together for class.  Neville of course did great.  He hid under the chair for a little bit, but found his brave heart and sat right beside Adam for the rest of the class and by the end he even found enough courage to sniff the male neighbor in class sitting beside him. 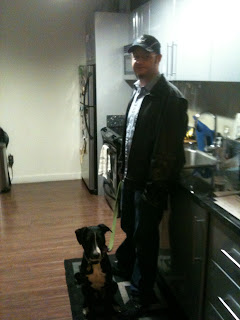 This past weekend was a big one for Neville!  In addition to tagging along for my class on Saturday, he accompanied us with my friend and her dog to a Splash Dog's event at Bass Pro.  The event was a lot of fun and since Neville doesn't have any dog issues, he did great.  Since we were at Bass Pro, I thought why not take him in the store.  He did SO well.  I was distracted by all there was to see, so I can only imagine how mind blowing it was for Neville, but he walked beside me and really only pulled when we went up the stairs.  We then went back to my friend's house where he ran around and around and around the back yard.  He was bucking and kicking in the air and just had a blast.  Needless to say, he slept the whole way home and then the rest of the night.
Sunday Neville and I started our Nosework class, it was amazing.  I have been on the instruction end of Nosework for over 2 years and I have seen it's healing power with fearful dogs, but to be on this end is truly amazing.  I thought that Neville would have a hard time with so many strangers in the room, but he was a natural!  He had no problem putting his nose in the box to get his food and he had no issues working in front of all those strangers, even when they clapped their hands and cheered for him.
After class I took him to my two male friends' house who has a dog that Neville has met before.  This was a big deal because one of my friend's he had not met before and since he is male I knew this would be hard.  But having the dog there really helped!  I was so proud of the progress that day, within a few minutes he was investigating my friend and by an hour in he was feeding him treats.  It was a terrific day! 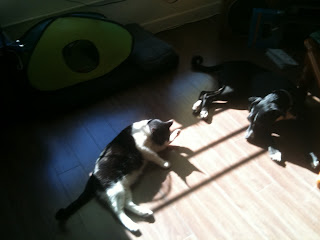 Finally, I get so many questions about this, how is the relationship between my cat, Cowboy and Neville going?  Great!  They don't hang out, but sometimes they sun themselves together and they do engage in the chase game.  Every so often you will catch one sniffing the other and the other day I even caught Neville licking Cowboy and no one lost an eye.
Overall, it is going as well as I could expect and I think it will only get better from here.  Stay tuned for more updates to come.
If you have a shy or fearful dog and need help, give us a bark!
Posted by Bark & Clark