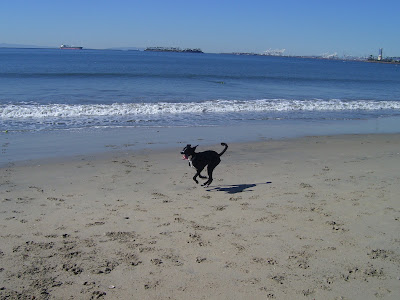 This Wednesday will mark Neville's 6th week as our foster dog and this past week and weekend have been big for him.
It started last Sunday when he was in Nosework with me and he started doing his bucking bronco play run during an off leash search.  He only does that when he is comfortable, so to see him do it in front of several people was a big deal.  Then on Tuesday night in class with Adam, he started to come out of his shell with the other people in class and the helpers by approaching them and sniffing.  That is such a big step for him.  He also got fitted with a K-9 Bridal (a head halter, very similar to the Gentle Leader, but the leash attachment is behind the head instead of under the chin), over the past few days I have gotten him walking in that and it has really improved things for him.  It is much easier to walk him and he seems to relax a bit more with it. Then came Wednesday.  This is the day that Adam left for New York for a week.  I could see that Neville was anxious when Adam did not get back into the car at the airport and every morning since he goes on his search for him.  When we get up, I let him out of his crate and the first thing he does is run to the bedroom and look on the bed, when he doesn't see Adam there, he runs to the bathroom and then back out to me.  Normally, I will let him out in the morning and he will run to the bedroom or bathroom to say hello to Adam, so seeing him search for him is very cute but a little sad.  It will be interesting to see how Neville reacts to Adam when he returns this Wednesday.
Thursday was another big night for Neville, he made me so proud.  I volunteer with Penny Scott-Fox on Thursday's for both puppy class and CGC/TDI, so I brought Neville with me to class since Adam wasn't at home.  We are preparing the class for the CGC test and part of that is meeting a strange dog and since Neville is great with other dogs, we thought he would be the perfect subject to prepare the class.  He was so good!  He listened to me with every command and was perfect with the other dogs.  But the surprise was him approaching and saying hello to a few of the people in class.  There was one woman that he walked right up to and rubbed against like he had known forever, it was really amazing.
Saturday was a fun night, I had people over to my house for a dinner party.  There were 6 of us total and Neville had met everyone except two people.  Since Neville does better with other dogs, I had them bring their dog with them.  It took Neville about an hour before he ventured out of the crate, but he did and then he played with the other dog a bit.  However, he really wanted to say hi to the people.  He sniffed everyone under the table, he needed to still have some shelter, but he was being so brave!  I couldn't have been more proud. 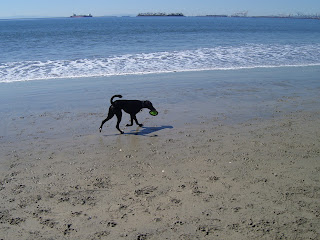 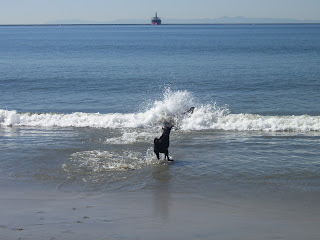 Finally, Sunday was here and it was time for the DOG BEACH!  I went with a couple of friends and their dogs to the dog beach in Long Beach.  It was a blast!  I started out with Neville on a long line and it was very clear this was going to be a hazard, so I let him off leash entirely.  I think my heart stopped for a moment because he took off in a dead run away from me.  I took a few steps in his direction and called him and there was no response, I thought for sure he would just keep running, but when he got to a certain point he came back.  He continued to run and get it out, but he never let me get out of his sight.  Before long he got into the groove with the other dogs we came with and attached himself to his new chocolate lab friend Zoe.  Everywhere she went Neville followed, even into the water!  We had lots of balls we were throwing, but Neville didn't want to pick them up, though he loved running after them.  We ended up throwing a frisbee and that is what Neville liked.  He ran after it, picked it up (after some encouragement) and then did the most amazing victory lap (or three).  He was so proud of himself.  By the end, he was exhausted and so was I!
It was such a fun weekend and the steps Neville took just continued to inspire me.  He is becoming more and more brave with each day.
For more on Bark & Clark, bark on the link:
Posted by Bark & Clark