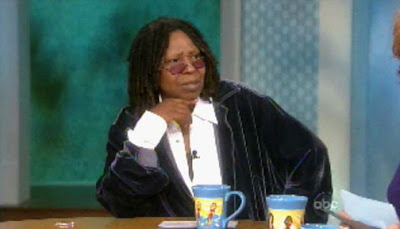 This past Friday on The View, Whoopi Goldberg gave her view on the possibility of the state of New York preventing pet stores from selling puppies.  She stated that she did not need the state telling her what she could or could not do.  Now because of her comments every dog blog is ripping her a new one.  What is not being said and if you watched the show, which I did, you would've seen Whoopi agreeing that puppy mills are wrong and she does not support them, nor does she support pet stores that keep puppy mills in business and have unhealthy puppies.  What she was saying was that she does not want her right to buy a puppy from a pet store taken away because of the bad apples.  Meaning, not all pet stores treat their animals this way or buy from puppy mills.
I am not saying that I agree or disagree with Whoopi, but what I am saying is that everyone is entitled to their point of view and when you are a host on a talk show that the whole premise is to express different points of view, what do you expect but for her to give her view.  In this case, she has friends that own pet stores that do not mistreat their animals, they do not buy from puppy mills and they have healthy pups to sell, that is who she was talking about.  It would've helped her point had she said that on Friday, but never the less she is entitled to her view and she never endorsed the puppy mills.  If you watch the show, you know her role is to be a bit outspoken about things, especially when new laws or bills are about to be passed in her state that effect her rights.  I have heard her rant in the same way about smoking laws.  She is a smoker and she does not want to loose her right to smoke if she wants to and she doesn't believe she should have to smoke by a dumpster in the back corner of the building.  There are many others I could bring up.  Beyond this, if you watch the show you also know what an animal lover she is.  More for cats, but she doesn't support the cruelty that goes on in most pet stores and the puppy mills.
My point of all of this is that I believe you should have the whole story before you fire on someone.  Really awful things have been said about Whoopi and I believe it is completely unnecessary.  She gave her point of view on a bill that was about to be passed or not, that is all.  To make videos, write blogs and articles that say she is supporting the puppy mills is a little harsh.
Just my view.
Posted by Bark & Clark