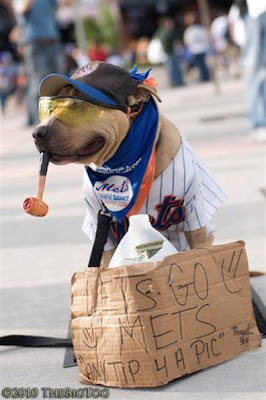 NBC New York and Dogster brought us a story yesterday about Coffee the dog.  Coffee is a dog that sits outside Citi Field for every Mets home game dressed up in a Mets uniform, bandanna, hat, glasses and a pipe and "earns" money for her owner by people paying to take pictures with her.  She apparently sits in this position for hours at a time and the fans have started to raise a concern for her well being. 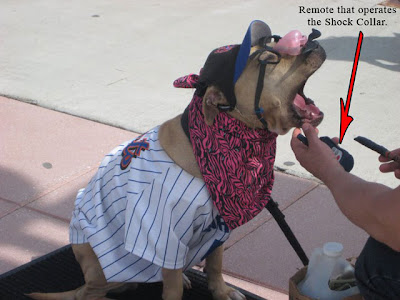 The claim is that she is wearing a shock collar and every time she starts to lay down, she is given a shock to sit upright again.  Further, fans say she sits in her own urine for up to 6 hours and is not given any food or water and doesn't have any teeth.  One fan, Jason Long, had enough and started a Facebook page, Stop Abusing Coffee.  This has caught the attention of the ASPCA and they are trying to investigate, but apparently they cannot get in touch with the owner.
Though the ASPCA could not find the owner, NBC New York did.  In an interview yesterday the owner, who is a dog trainer and says he rescued Coffee from the streets, claimed that there is no abuse at all.  That the "shock collar" is actually an ice collar to keep her cool and she is given water and breaks whenever she likes and has been trained to clinch the pipe in her mouth.  Lastly, she has a full set of teeth.  All of this can be seen here in a video of the interview.
This story has left me with one question, is this abuse or not?  There is certainly evidence for both cases.  I hope a full investigation is done and then it will at least have been looked into, if there is abuse, hopefully it will be found.  If not, hopefully Coffee lives a happy healthy life.
Posted by Bark & Clark