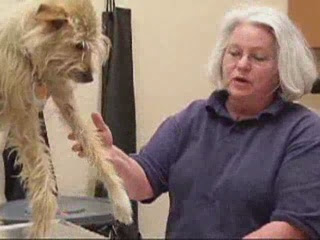 When a massive tornado hit Alabama in late April, Mason a Terrier mix was carried away.  His owners thought he was gone forever, but to their surprise, Mason crawled home with two broken front legs two weeks later.  The couple had returned to go through the debris that was left of their home and they were greeted with an unexpected sight of Mason laying in front of their front door.
The couple who is now struggling to get back on their feet after the horrible tornado demolished all they had, could not afford to care for Mason or get him the much needed surgery.  So they did the only thing they could and turned him over to the Birmingham-Jefferson County Animal Control shelter.  The shelter then was able to get in touch with the very generous Vulcan Park Animal Care Clinic, which is donating the surgery to Mason.
The video below tells the story (give it a minute to load, it is a little slow).
We wish Mason the best and all the surviving animals of this tragic tornado.
Posted by Bark & Clark