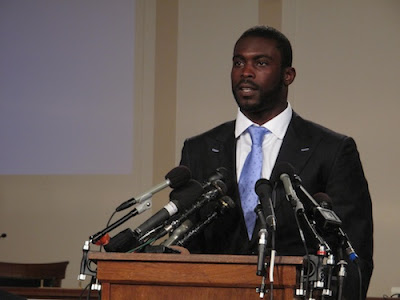 I have been very vocal about my disgust with Michael Vick in the past.  I have went so far as to say that his school and other appearances are not enough.  So now, I humbly say, maybe I have been way too harsh.  There is no way to forget his hideous acts in the past, but it would appear he is really stepping up to help right a major wrong.  Michael Vick has announced his support for The Animal Fighting Spectator Prohibition Act, which would make it illegal to attend a dog fight or cock fight. Vick, who served two years in prison for his role in a dog fighting ring, says stiffer penalties could prevent people from attending fights.  So he is now teaming up with Rep. Jim Moran (D-Va.) to push for this federal legislation.
This does not wipe away his past, but I think it is a big step to helping save many dogs in the future.  We all make mistakes, some just seem worse than others, but we should all be given the chance for redemption.  Perhaps this is his.  Below is a video with a bit of the press conference and explanation of the new Bill.
Posted by Bark & Clark