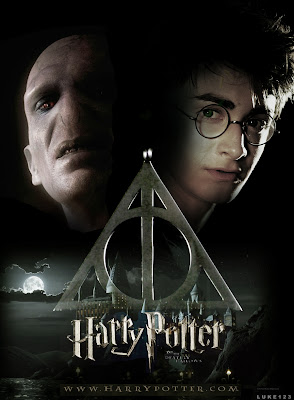 Okay, I know this has nothing to do with dogs or Downtown, but I went to Harry Potter The Deathly Hallows Part II last night and it is all I will be able to talk about.  I still feel like a screaming teenage little girl!  The audience was by far the worst part of the whole deal, but they also added that extra level of entertainment and feeling that you were all in this together.
The night's action started with a live duel between two audience members (I'm certain it was rehearsed prior) and was preceded and followed by many dressed as characters from the movie... very fun!
But once the movie started all I could do was feel my heart pound and watch every exciting moment after the next.  The anticipation, excitement, terror, heart break and pride you feel throughout the film is enough to give any Harry Potter fan the fix we have so badly been craving.  The acting was fantastic, such a talented group!  Even the characters you love to hate are a joy to watch on screen because the actors are so committed and so good!
I was a huge fan of the books and this may be the first movie since the first one that I wasn't completely disappointed by the changes the film adaptation made.  Oh, it was good! Here is a trailer and a 6 minute bring you up to date video just in case you haven't seen it.
If you are a fan, go see it.  I didn't do 3D, but I might have to go back for that too.
Have a happy and safe weekend, and even if you go to the movies, don't forget to do something fun with doggy!
Posted by Bark & Clark