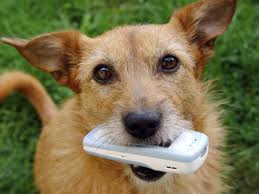 Petside had a great story about a Basset Hound in the UK that was choking on a telephone cord and ended up dialing "999", their emergency number, and saved his own life!  It is quite an amazing tale.

Like a dog dialing 911 in the U.S., George, a Basset Hound in the UK dialed emergency 999 while trying to free himself from a phone cord, and saved his own life.

The emergency operator received a call and heard nothing but heavy breathing and gasping, so police were dispatched to the house of owners Steve and Lydia Brown immediately, reports The Sun. In the UK 999 is the equivalent of 911.

Turns out poor George had knocked over a land line and wrapped the wire around his neck. He managed to paw on the "9" over and over, trying to free himself. And that he did.

Quite a few dogs have dialed 999 in the past, many by accident.

In 2009, 14-month-old Golden Retriever grabbed the house phone in his mouth and ran into the garden. Dispatchers heard  a man shouting at him, and assumed it was an attack. It was just his owner trying to get him back inside.

In cases of American dogs dialing 911, they are often service dogs trained to reach dispatchers during emergencies.

In 2007, a Beagle named Belle bit down on her owner’s cell phone, hitting the number "9" while he was having a seizure. Since he is diabetic, Kevin Weaver had trained Belle to do just that. He had programmed 911 into the "9" button of his phone. Belle saved his life.

So would American dogs be better off if our emergency number consisted of three identical digits, making it easier for them to “paw” the call?

The number 911 was chosen as the American emergency call-in back in 1968, because it was short, and it wasn't already being used as an office, area, or service code.

However the 999 system is even older, first introduced to London in 1937. The "9" was the easiest button to modify as a number someone wouldn’t be charged for on rotary pay phones of the day. It’s neighbor "0" was already doing the same, as the operator contact.

Perhaps it’s a good idea for Americas to make use of the single-button emergency call options on our home and cell phones… that is after we teach our dogs to only paw in the case of an emergency.

This story inspires me to store "911" in one of my speed dials so I can teach my dog to dial it in the case of an emergency.  Though I don't think his paws are compatible with the iPhone screen.  Sometimes I miss land lines...
Posted by Bark & Clark