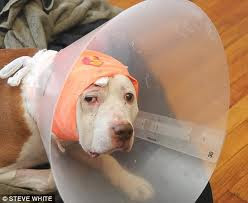 It isn't often that we get to read or hear about feel good stories involving Pit Bulls, but today I have one for you.  I will admit it is sad and a bit scary, but it has a happy ending and these usually don't.  Enjoy this heroic story of Kilo.

A Staten Island, N.Y., dog took a bullet for his owner and lived to wag his tail.
Kilo the pit bull was shot in the head as he tried to protect his owner from a would-be home invader posing as a FedEx deliveryman over the weekend, according to The New York Post.

The bullet ricocheted off his skull and exited through his neck, which is likely what gave him a chance to survive.

“This is like, one in a million,” Dr. Greg Panarello, whose veterinary clinic operated on Kilo, told The Post. “He’s very lucky.”


The pup's shooting happened when an intruder tried to push his way into Justin Becker's home in Graniteville, claiming he had a package to deliver, early Saturday evening, the Post reported.

The 32-year-old Becker pushed the armed intruder to the ground, but the suspect's body was already halfway inside the apartment. Kilo stuck his head out the door and the suspect pulled the trigger.

Then he ran off, leaving Becker to cradle his wounded 12-year-old pup in his arms. Becker told the Post his girlfriend thought for sure the dog would die, but Becker said he wasn't giving up on his old friend.

Kilo was able to return home to continue his recovery process.

Kilo sounds like an amazing 12-year-old!  What a brave and loyal friend to put himself in harms way.  We are all very happy that Kilo was so lucky and is able to continue to recover at home.

Happy Friday!  Don't forget to do something special with your dog this weekend.
Posted by Bark & Clark