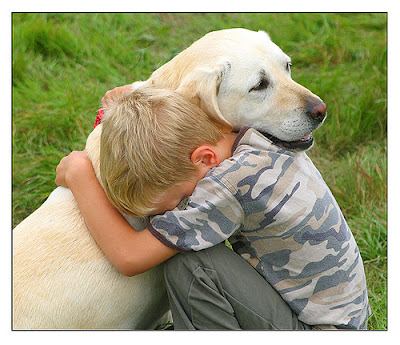 Dogster had a great article this morning about dog hugs.  Basically it is saying that a majority of dog owners (in this study anyway) are more likely to hug their dog than their spouse/significant other, relatives, or best friends.  I am guilty of this for sure.  My favorite thing in the day is to hug my dog and then dance with him.  In that moment I feel like both mine and my dog's hearts are smiling.  There is something about the way he wraps his head around my shoulder, it feels like he is hugging back and it makes me feel very happy.

Below is the article, I thought it was worth sharing.

Got dog fur across the fronts of your sweaters and shirts? Not surprising, according to a recent dog owner survey. Blame it on our dogs being just too embraceable to resist.

That's a lot of dog love, and could help explain what (at least to me) seems to be a rise in fur/lint rollers in stores.

But is one dog's affection gain someone else's loss? Does the good old physics law of the conservation of mass/energy apply here? Possibly. The survey of 482 U.S. adult dog owners in the Beneful Baked Delights survey found that 10 percent of women say they hug their dogs more than they hug their spouses or significant others. That probably translates to 10 percent of spouses who would like to be treated like a dog.

So what's so intoxicating about hugging a dog? The majority of owners surveyed say that hugging their dog makes them smile and feel happier. Nearly 40 percent say hugging their dog causes them to forget about the stress in their lives.Hugging isn't just a one-way street, either. According to the survey, more than 60 percent of owners say that when they hug their dog, the dog returns their affection.

I think it's true. Dogs may not hug you back, but they embrace with their eyes and a certain way of leaning and being quiet and in the moment of the hug.

So, am I the only one that hugs my dog?  Somehow I doubt that.  So tell us about it.  Share your story of doggie hugs and how they make you feel.
Posted by Bark & Clark