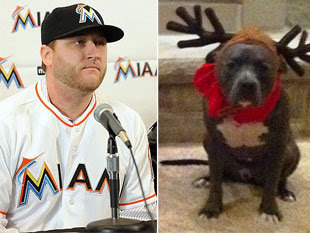 When I see these articles about bans placed on Pitbulls in various places throughout the U.S., I can't help but have a bit of a flash back to a time that we were showing the same discrimination to humans based on the color of their skin.  Did we learn nothing?  My hope is that one day we will wake up and understand all dogs have the potential to be good or bad, it all depends on the owner and the chemical make up in their brain.  But that also is true of ALL animals and humans.

Today I want to share with you a story out of Miami.  Mark Buehrle was signed to an amazing deal to play for the Miami Marlin's, though he encountered a road block when trying to find housing due to a ban on pitbull's in Dade County.  Below is the full story.  Luckily, this one has a very happy out come.

Mark Buehrle's left arm may have been greeted warmly down in south Florida this offseason, but the same can't be said for one of his family's four dogs.

According to the Miami Herald, "Slater" Buehrle, an 18-month-old American Staffordshire terrier, falls under a pitbull ban that has been in place in Miami-Dade County since 1989. That means the Buehrle family didn't have the option of moving anywhere close to the Miami Marlins' new ballpark after Mark  signed a four-year, $58 million deal with the team last month.

Mark Buehrle, a dog lover who made headlines when he said he hoped Michael Vick would get hurt, avoided the ban by moving his family to a dog-friendly development in south Broward County. And while he says he wouldn't have signed with the Marlins if there had been no housing alternatives for Slater and the rest of his family, Buehrle still wants to speak up against the injustice of the ban.

From the Miami Herald:


Mark Buehrle believes "it's kind of ridiculous that because of the way a dog looks, people will ban it. Every kind of dog has good and bad, and that depends on the handlers. If you leave a dog outside all the time, it'll be crazy. Slater would never do anything harmful.''
Mark Buehrle grew up with cats, rabbits and fish, but got his first dog with Jamie. They married in 2005 and are spokespeople for Utah-based Best Friends Animal Society, which accepted 22 of Philadelphia Eagles quarterback Michael Vick's pit bulls.

The Buehrles have three other dogs — Viszlas named Diesel, Drake and Duke — and adopted Slater after Jamie fell in love with him during work with an animal rescue group. Judging from his festive getup in the picture above, he sure doesn't look too menacing.

As a dog lover who has admired Mark and Jamie Buehrle's work with "Sox for Strays" in Chicago, I agree 100 percent with the pitcher's stance. Without getting into a long drawn-out debate on the subject, the danger with pitbulls lies more with the responsibility of its owners and not the breed itself. There's absolutely no reason why a well-trained dog and its family should be discriminated against through government legislation.

The good news, of course, is that at least this tale has a happy ending. Though Slater and the Buehrles were forced to go live elsewhere, perhaps their story will help end a ban that causes a much bigger hardship for other families.

After all, not everyone who moves to Miami-Dade County for a job has the luxury of being able to choose where to live. The awareness the Buehrles are driving could prevent dog owners from having to make a decision they shouldn't have to in the first place.

Again, I am glad their is a happy ending here, but this fight to change the perception of pits is an ongoing fight.  Dog discrimination is just as wrong as any other type.   Judge the deed, not the breed!
Posted by Bark & Clark